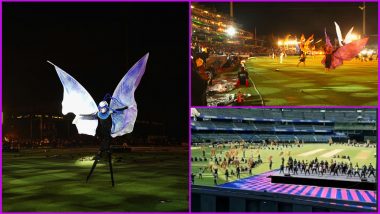 The 15th edition of India's cash-rich star-studded Twenty20 cricket tournament, Indian Premier League (IPL) aka TATA IPL 2022 will kick off on March 26, Saturday. Like previous seasons, the Board of Control for Cricket in India (BCCI) has decided to to scrap the opening ceremony of IPL 2022 as well. As a mark of respect for the slain Pulwama CRPF soldiers in 2019 the IPL Opening Ceremony was not held and since then, BCCI has continued with the stance. With no ceremony this year as well, let us look back at some of the highlights of the opening ceremonies over the years.  IPL 2022 Schedule, Free PDF Download Online: Get Indian Premier League 2022 Fixtures, Time Table With Match Timings and Venue Details..

2013 IPL Opening Ceremony- Pitbull performs in Kolkata: American rapper Pitbull who has quite a huge fan following in India performed before a capacity crowd in Eden Garden, Kolkata. He set the stage on fire with several of his hit numbers and was later joined by Shah Rukh Khan, Deepika Padukone and Katrina Kaif. The multiple award-winning artist was the main attraction of the opening ceremony and received a lot of media attention.

2010 IPL Opening Ceremony- Laser Show: Back in 2010 at the DY Patil stadium in Navi Mumbai, an enormous laser show was part of a start-studded occasion. A multi-coloured laser show was on display for the fans who were mesmerised by the beam of LEDs and laser. This act by a laser artiste was different from the regular Bollywood performances and hence made it memorable. IPL 2021 Winner: Ahead of 2022 Edition, Here's Recap of Indian Premier League Season 14.

2009 IPL Opening Ceremony in South Africa: Due to the security issues, the 2009 IPL was shifted to South Africa and what a huge hit it was even though it was outside India. In the opening ceremony held in New Lands, Cape Town Local Zulu Dancers were on show in addition to the local Djembe drummers who stole the show. Renowned band Snow Patrol also was invited to perform as the organisers decided to take the event to a more international level.

2012 IPL Opening Ceremony- Priyanka Chopra steals the show: The 2012 IPL opening ceremony was all about Priyanka Chopra as the Bollywood actress enthralled the audience with her power pack performance. She made Harbhajan Singh dance as part of a small gig and also interacted with cricketers like Mahendra Singh Dhoni. Her opening act on the popular song “Aaj Ki Raat” sent the fans in frenzy.

(The above story first appeared on LatestLY on Mar 26, 2022 05:57 PM IST. For more news and updates on politics, world, sports, entertainment and lifestyle, log on to our website latestly.com).