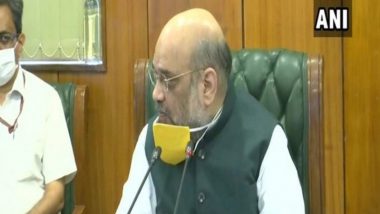 New Delhi, August 3: A day after the Board of Control for Cricket in India (BCCI) decided to hold the 13th edition of the Indian Premier League (IPL) in Dubai, the Confederation of All India Traders (CAIT) has urged Union Home Minister Amit Shah and External Affairs Minister S. Jaishankar not to give the go-ahead to the event.

The BCCI at the Governing Council meeting of IPL on Sunday decided to continue with Vivo as the title sponsor and organise the league between September 19 and November 10 in Dubai. IPL 2020: Here’s How Mumbai Indians, CSK, KXIP, KKR & Other Franchises Announced About Start of IPL 13.

The CAIT, which is spear-heading a movement for boycott of Chinese goods, also criticised the BCCI's decision to retain VIVO, the Chinese company, as the IPL title sponsor.

"We have sent a communication to Shah and Jaishankar, demanding not to give approval to the BCCI for holding the IPL in Dubai," the CAIT said and added, it would contradict the government policy.

In the letter, CAIT national president B.C. Bhartia and secretary general Praveen Khandelwal said at a time when Chinese aggression on Indian borders gave rise to the anti-China sentiments in India, the BCCI's decision was contrary to the broad government policy.

Citing the cancellation of events, like Olympics and Wimbledon, due to the Covid-19 pandemic, they said the BCCI decision must be condemned. The BCCI's move reflected its greed for money, it said.

They also said the Centre had taken several steps to reduce country's dependence on China, which included ban on 59 Chinese apps, rejecting partnership of Chinese companies in railways and highway projects. Under such a scenario, the BCCI decision smacked of utter disregard for the government policy, involving Chinese companies, they said. IPL 2020: Kings XI Punjab Relive Hardik Pandya and KL Rahul’s Jersey-Swap Moment Ahead of Indian Premier League 13 (Watch Video).

Earlier in the day, Congress spokesperson Jaiveer Shergill also took a swipe at the government for IPL being sponsored by Chinese companies, PM-CARES fund being run by donation from China, Pangong Tso and Depsang Plains being controlled by China due to clean chit by the Prime Minister.

"The BJP's fake nationalism is cause of zero disengagement at LAC," he tweeted.

(The above story first appeared on LatestLY on Aug 03, 2020 09:40 PM IST. For more news and updates on politics, world, sports, entertainment and lifestyle, log on to our website latestly.com).