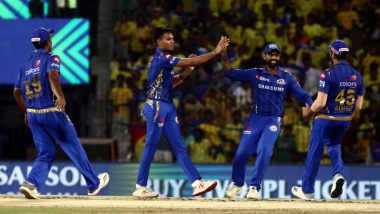 Cricket fans are nothing but ecstatic as the official dates of Indian Premier League (IPL) 2020 are finally out. Brijesh Patel, IPL governing council chairman, confirmed that the marquee T20 tournament will get underway on September 19 while the finals will be played on November 8. The full schedule of the tournament hasn’t been announced but it is also expected to come out soon. Netizens went berserk after coming across the news as they filled Twitter with hilarious memes and comments. In fact, #IPL2020 became one of the top trends in India. IPL 2020 Dates Announced: Indian Premier League 13 Scheduled to Begin on September 19 in UAE.

Ever since the ICC T20 World Cup got postponed due to COVID-19, fans were anticipating the announcement of IPL 2020. Earlier, BCCI was planning to host the tournament in India only. However, UAE got the hosting rights of the gala tournament owing to the Coronavirus crisis in India. Meanwhile, let’s look at how the fans reacted after the dates of IPL 2020 came out.

#kkrhaitaiyaar : IPL to Start from 19th September and Final on 8th November In UAE, Can't wait to see our Knights 😍 @KKRiders

Me and My Bois :- pic.twitter.com/Y8WphIypyP

How Many Of you waiting for King's Entry?

I am a RCB fan in ipl but the only reasons i wanted ipl to happen this year was to watch this man back on field ❤️❤️.#IPL2020 pic.twitter.com/mdjHFlMqK6

Me and Bois after hearing ipl is gonna start from Sept 19 pic.twitter.com/E0C8RZxOxR

Speaking to PTI, Brijesh Patel said: “The governing council will meet shortly but we have finalised the schedule. It will run from September 19 to November 8. We expect government approval to come through. It is a full 51-day IPL.”

On being asked about the participation of England an Australian players as they will be playing a bilateral series in September, Patel said: “Shouldn’t be a problem. The England-Australia series ends on September 15. So, we should have them flying directly to Dubai. We will discuss the final matters in the governing council meeting next week.”

(The above story first appeared on LatestLY on Jul 24, 2020 02:38 PM IST. For more news and updates on politics, world, sports, entertainment and lifestyle, log on to our website latestly.com).