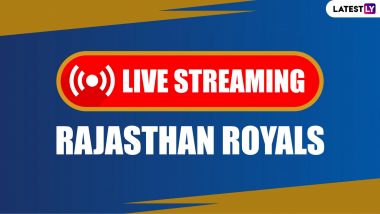 Live Streaming of IPL 2020 in Hindi Commentary: Rajasthan Royals (RR) will begin their quest for a second IPL title when the Steve Smith-led side takes on Chennai Super Kings in their opening game of IPL 2020. RR won the inaugural edition of the competition in 2008 but since then have failed to make it to the summit clash. Meanwhile, RR fans searching for where and how to watch Kings XI Punjab matches in IPL 2020 should scroll down below for all information, including live telecast, live streaming inline details on Hotstar and Star Sports. RR Squad for IPL 2020 in UAE: Check Updated Players' List of Rajasthan Royals Team Led by Steve Smith for Indian Premier League Season 13.

This is the second time the tournament will be played in the United Arab Emirates, with 2014 bring the last time the competition was held in the gulf country. Since their title win in 2008, Rajasthan Royals have managed to reach the playoffs just thrice. Most recent being the 2018 edition. However, last season they finished second from bottom and will look to give a better account of themselves this season. RR Team Profile for IPL 2020: Rajasthan Royals Squad in UAE, Stats & Records and Full List of Players Ahead of Indian Premier League Season 13.

RR boast several heavyweights of the shortest format of the game and with the likes of Steve Smith, Jofra Archer, David Miller and Ben Stokes in their ranks, the franchise will fancy their chances. Rajasthan also added Robin Uthappa, Jaydev Unadkat, Yashasvi Jaiswal, Andrew Tye and Oshane Thomas during the player auction which was held last in December last year.

Rajasthan Royals (RR) fans across India can catch the live action of all RR matches in IPL 2020 on Star Sports channels. Star Sports is the official broadcaster of Indian Premier League (IPL) in India and will provide live telecast of all the matches for IPL fans on its channels. The IPL 2020 matches will be available in Hindi commentary as well on Star Sports 1 Hindi and its HD channel. Those not able to watch the games live on Star Sports can also catch live action online. Disney+ Hotstar will be live streaming all the IPL 2020 matches, including all RR matches, online for fans in India. Meanwhile, fans from the USA Can watch live streaming of RR matches in IPL 2020 on Hotstar USA.

Rajasthan Royals start their IPL 2020 season with a clash against Chennai Super Kings on September 22, 2020, in Sharjah. Steve Smith will be leading the side after regular captain Ajinkya Rahane parted ways with the team to join Delhi Capitals. The Australian captained now-defunct Rising Pune Supergiants to IPL 2017 finals and will be looking to replicate that.

(The above story first appeared on LatestLY on Sep 22, 2020 07:17 PM IST. For more news and updates on politics, world, sports, entertainment and lifestyle, log on to our website latestly.com).