IPL 2020: Spectators to be Allowed in Sharjah, Dubai and Abu Dhabi Cricket Stadiums During Indian Premier League Season 13 in UAE? 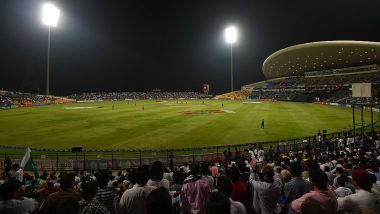 Indian Premier League 2020 (IPL 2020) is finally heading to the United Arab Emirates (UAE). IPL 2020 schedule is not out yet, but it is confirmed to start on September 19 and end with final on November 08. IPL governing council is expected to meet soon and finalise the schedule and other things related to the lucrative T20 league. The idea behind hosting the IPL 2020 in the UAE is because the Gulf country has just close to 60,000 coronavirus cases and so far over 340 deaths have taken place in UAE due to the novel virus. IPL 2020 Update: Emirates Cricket Board Confirms Receiving BCCI's Letter of Intent to Host Indian Premier League.

With IPL 2020 set to be held in the UAE, it remains to be seen whether spectators will be allowed inside the stadiums or not. England's three-match Test series and upcoming fixtures against Ireland and Pakistan will be held behind the closed doors. However, the limited number of fans were allowed to watch a friendly cricket match between Surrey and Middlesex at The Oval in South London. With IPL, still over a month away chances are fans could be allowed inside Sharjah, Dubai and Abu Dhabi stadiums. IPL 2020 Players Update: Dwayne Bravo, Andre Russell, Kieron Pollard, Sunil Narine and Other West Indies Cricketers to Miss First Few Matches of Indian Premier League Season 13 Due to CPL T20?

Earlier, Emirates Cricket Board's (ECB) general manager Mubashir Usmani had hinted that spectators might be allowed if IPL takes place in UAE. "Having spectators in stadiums is subject to government approval. We will have a detailed discussion before deciding anything. There's still time, and we might consider it if the IPL is cleared to be held here," Usmani told The Telegraph.

Recently, UFC 251 "Fight Island" was held in Abu Dhabi's Yas Island but no spectators were allowed. It was an indoor event, and thus authorities would have thought against allowing fans.

(The above story first appeared on LatestLY on Jul 27, 2020 10:42 PM IST. For more news and updates on politics, world, sports, entertainment and lifestyle, log on to our website latestly.com).