The effect of IPL isn’t just limited to the on-field action. Promotional events, social media campaigns, fan activities and many other factors are making IPL ‘India ka Tyohar.’ Intriguing advertisements of the tournament have also bagged a lot of praises of fans. 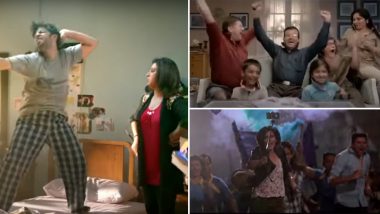 Cricket lovers can’t keep calm as the 13th edition of the Indian Premier (IPL 2020) is around the corner. The gala T20 tournament is a vital part of India’s cricket calendar and its craze is nothing but massive. Fans cherish great cricketing action as prominent players from all around the world and joining forces with Indian stars to win the prestigious title. In fact, the effect of IPL isn’t just limited to the on-field action. Promotional events, social media campaigns, fan activities and many other factors are making IPL ‘India ka Tyohar.’ Intriguing advertisements of the tournament have also bagged a lot of praises from fans. In fact, the theme song of the upcoming tournament is nothing short of spectacular. From MS Dhoni to Virat Kohli, Check Out Captains of All 8 Teams in Indian Premier League 13.

The 13th season of the gala T20 league is unarguably the most awaited edition of IPL, and this theme song perfectly sums up every cricket fans’ dream. Due to the COVID-19 pandemic, jam-packed crowd will not be seen UAE. However, the ‘Aayenge Hum Wapas’ track ignites a hope that cricket will be regular once again and fans can enjoy the live action in stadiums. With IPL 2020 taking a countdown, let’s look at five best ads of IPL over the years. From Chris Gayle to MS Dhoni, A Look at Players With Most Man of the Match Awards in Indian Premier League.

The greater the setback 😷

The stronger the comeback 💪

With best T20 players all over the world featuring in the tournament, IPL becomes nothing less than a carnival. However, this ad took the saying too seriously. From Adam Gilchrist’s roller coaster to MS Dhoni’s twirler, the fair had many attractive rides which a cricket fan would dream. However, one must not go near the Kumar Sangakkara’s fire show. IPL 2020 Schedule For PDF Download With Match Fixtures and Timings in IST Goes Viral Ahead of Official Announcement, Here's Fact Check on Fake UAE Time Table!

This advertisement was released ahead of IPL 2013, and the fans loved it. It was absolutely hilarious the way Farah Khan was coming out of nowhere and making people dance over the song Jumping Japang Jumpak Jumpak. Well, the veteran choreographer certainly did a great job as fans all over India learnt those steps.

Watching IPL matches becomes a part of fans’ daily schedule, and this advertisement shows precisely that. The ad showcased that cricket lovers tend to keep everything aside when IPL gets underway, and fans were indeed able to relate with the people in the video. However, skipping marriage for one game will definitely not be a wise decision.

As mentioned above, IPL is a festival for many fans which is celebrated for one and half months. Owing to the fact, this advertisement was made which depicts the love of the gala league. People from different communities, areas, fields and age groups can be seen enjoying IPL together which showcases the culture of the tournament in India.

Remakes of Bollywood songs often face criticism by fans. However, this IPL anthem was loved by one and all. Creators reworked on the classical song ‘Yeh Desh Hai Veer Jawaano Ka’ and converted it to an anthem. Along with showcasing how prominent players from all over the world are coming together in the league, the anthem also highlights how youngsters have been using the opportunity to make a mark.

Speaking of IPL 2020, the tournament will get underway on September 19 while the final is scheduled to be played on November 10. Due to the COVID-19 crisis in India, however, the upcoming tournament will be played in UAE, and it’ll be interesting to see how the players will adapt the new conditions.

(The above story first appeared on LatestLY on Sep 06, 2020 03:18 PM IST. For more news and updates on politics, world, sports, entertainment and lifestyle, log on to our website latestly.com).