Many T20 stars will feature in the auctions capable of making a mark in all conditions. Several Indian players like Harbhajan Singh and Piyush Chawla, who got released from their previous franchises in the retention event, would be under the teams' radar. At the same time, the shining stars from Syed Mushtaq Ali Trophy 2021 can also attract the bidders. 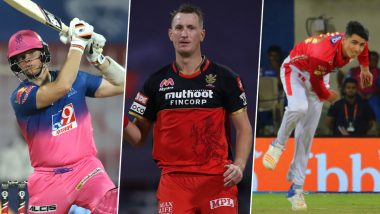 The Indian Premier League (IPL) 2021 players' auction is set to take place on February 18 (Thursday) in Chennai. As many as 292 players will go under the hammer with just 61 spots up for grabs. Although it's a mini-auction, all franchises have to keep multiple factors in mind while making bids. Firstly, it's still not confirmed whether the gala T20 tournament will be played in India or overseas. If BCCI even manages to conduct IPL 2021 in India, not every franchise will get to play at its home due to the COVID-19 pandemic. IPL 2021 Players Auction: Date, Time, Live Streaming, Purse Details and All Other Things You Need to Know.

Nevertheless, many T20 stars will feature in the auctions capable of making a mark in all conditions. Several Indian players like Harbhajan Singh and Piyush Chawla, who got released from their previous franchises in the retention event, would be under the teams' radar. At the same time, the shining stars from Syed Mushtaq Ali Trophy 2021 can also attract the bidders. Team owners must also have gone through players featuring in Big Bash League (BBL) and Abu Dhabi T10 League, who can impact the upcoming season. With IPL 2021 Auctions just around the corner, let's look at the top three players who can get the highest bids. IPL Most Expensive Players: From MS Dhoni to Ben Stokes, Full List of Record Buys in Each Indian Premier League Season.

Rajasthan Royals released the Australian dasher after a terrible season in IPL 2020. However, nothing can defy that Smith is a valuable customer in T20s and could be a great asset for any team. While he can play the anchor in the middle overs, his wide range of shots makes him a nightmare for the bowlers. So, don't be surprise if teams break their bank for the Aussie star.

The South African all-rounder was sensational last season, and many eyebrows were raised when Royal Challengers Bangalore (RCB) released him in the retention event. While he couldn't do much with the bat, he took 11 wickets in nine games at an economy of just over six. Morris was also in sensational touch in the recently-concluded Big Bash League (BBL) where he represented Sydney Thunder. Hence, the Proteas star can also get big bucks during the auction.

The mystery off-spinner from Afghanistan didn't get many chances in IPL 2020 with the likes of Chris Gayle, Glenn Maxwell and Nicholas Pooran filling the overseas spots in Kings XI Punjab (KXIP) line-up. Subsequently, he was released from the KL Rahul-led team. However, he'll surely be on the radar of multiple franchises including KXIP. While his prowess with the ball is hidden from none, he has also emerged as a handy batsman in recent times.

Notably, Kings XI Punjab (53.2) and Royal Challengers Bangalore (35.4) have the biggest purse in the auctions, and they'll try to make optimum utilization of the money. At the same time, teams like Sunrisers Hyderabad, Delhi Capitals and Mumbai Indians haven't released many players and will look for fillers.

(The above story first appeared on LatestLY on Feb 17, 2021 12:18 PM IST. For more news and updates on politics, world, sports, entertainment and lifestyle, log on to our website latestly.com).