IPL Most Expensive Players: From MS Dhoni to Ben Stokes, Full List of Record Buys in Each Indian Premier League Season Ahead of IPL 2021 Players Auction

Just a year after captaining India to a maiden T20I World Cup win, MS Dhoni was the most expensive pick at the inaugural edition of the IPL with CSK signing the World Cup-winning skipper for a whopping Rs 9.5 crore. Dhoni led CSK to the final and there began his love story with the franchise that remains alive to date. 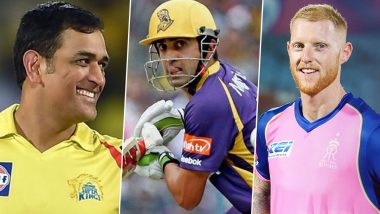 Over the years, the Indian Premier League (IPL) has become a lucrative avenue for cricketers around the globe to make money. As one of the richest T20 franchise leagues worldwide, the IPL witness massive amounts being spent at the player auctions with franchises breaking the bank to get the players of their choice. Every IPL players auction turns some cricketers into millionaires overnight. This is promises to be somewhat similar with many top T20 cricketers available at the auction. Here we look at the list of the most expensive players at each IPL players’ auction. IPL 2021 Players Auction: Date, Time, Live Streaming, Purse Details and All Other Things You Need to Know.

There have been some astonishing expensive picks at the IPL auction over the years with Rajasthan Royals picking Jaydev Unadkat for Rs 11.5 Crore in 2018 and Rs 8.4 Cr 2019 among the most surprising choices. As another IPL players auction hits us in a couple of days, take a look at the most expensive players in each IPL players auction in the past 13 seasons. IPL 2021: Full List of Players Released and Retained Ahead of Indian Premier League Season 14 Auction.

Most Expensive Players in Each IPL Season

Just a year after captaining India to a maiden T20I World Cup win, MS Dhoni was the most expensive pick at the inaugural edition of the IPL with CSK signing the World Cup-winning skipper for a whopping Rs 9.5 crore. Dhoni led CSK to the final and there began his love story with the franchise that remains alive to date. With the bat also Dhoni was exceptional and scored 414 runs in 16 matches as CSK finished as runner-up.

Both the English stalwarts were the top picks in the second edition of the IPL. But both failed to inspire their sides. Flintoff was bought by CSK for Rs 9.8 Cr approx but limped out of the tournament with an injury after just three games in which he scored 62 runs and picked two wickets. Pietersen was made the captain by RCB but had a dismal season and was eventually replaced by Anil Kumble as the captain.

KKR picked bond and he made an instant impact picking nine wickets in eight matches at an economy of 7.22. Pollard was signed for the same figure by Mumbai Indians and he too had a good debut season for MI and hasn’t been let go since by the franchise. Pollard picked 15 wickets and scored 273 runs in 14 matches for the franchise.

KKR made Gambhir their captain after a major overhaul in IPL 2013 and it proved their best pick at the IPL auction. Gambhir scored 378 runs in 15 matches and also led the franchise to the playoffs for the first time. He would go on to lead the franchise to two IPL titles.

CSK once again broke the bank for one of India’s most promising all-rounders. Jadeja had a decent debut season for CSK after scoring 191 runs and picking 12 wickets in 19 matches.  He has been with the Men in Yellow since and has become one of their talismen.

Still, some years far from being a household name in T20 cricket, Maxwell was picked by Mumbai Indians at the auction as a big-money signing. But he failed to inspire and was put on the bench after failing to perform in the three matches he played. Maxwell scored 36 runs in those three games and watched from the sidelines as MI lifted their maiden IPL title.

RCB made Yuvraj the second most expensive player in IPL history after paying Rs 14 Crore for him. He had a decent season and scored 376 runs in 14 matches while also taking five wickets. This was one of Yuvraj’s most productive season in the IPL.

After an impressive outing in the previous season, Yuvraj was in demand and was picked for a higher price in IPL 2015. Delhi Daredevils (now known as Delhi Capitals) paid Rs 16 Crore for the India all-rounder making him the most expensive player in IPL history. But Yuvraj was a disappointment scoring only 248 runs in 14 matches and failing to pick a wicket as Delhi finished at the penultimate position.

RCB picked former Australia all-rounder Shane Watson for Rs 9.5 Crore and although Watson disappointed with the bat, he was excellent with the ball in hand in leading RCB to the final. He scored 179 runs in 16 matches and picked 20 wickets.

In his debut season in the IPL, Stokes became the most expensive overseas player in IPL history when RPS signed him for Rs 14.5 Crore. Stokes justified his price tag as Rising Pune Supergiant raced to the final. Stokes scored 316 runs, including a century, and picked 12 wickets in his first season in the IPL.

After a phenomenal run in his debut IPL season, Stokes was a player in demand in the IPL 2018 players auction and Rajasthan Royals eventually signed him for Rs 12.5 Crore. But Stokes failed to replicate his performance from the previous season. The England international managed only 196 runs in 13 matches and picked up eight wickets.

Rajasthan Royals had released Jaydev Unadkat but picked him again from the auction for Rs 8.4 Cr. But the Saurashtra pacer couldn’t justify his price tag and picked only wickets at a poor economy of 10.66. Kings XI Punjab paid the same amount to pick a relatively unknown Varun Chakravarthy after his good performance in the Tamil Nadu Premier League. Varun played only one match and picked one wicket before injury ruled him out.

KKR, searching for a world-class pacer to assist their young Indian fast bowlers, picked Pat Cummins for a whopping Rs 15.5 Cr. But the Australian, who is ranked World No 1 in Tests, failed to live up to the price tag and picked only 12 wickets. With the bat, he was handy in some matches and also scored a half-century.

(The above story first appeared on LatestLY on Feb 16, 2021 05:05 PM IST. For more news and updates on politics, world, sports, entertainment and lifestyle, log on to our website latestly.com).