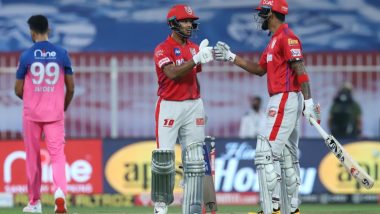 Rajasthan Royals has been one of the admins who has always come up with witty tweets on social media. They are often the ones who had always come up with the wackiest of replies when trolled which often make us go ROFL. Now, Rajasthan Royals have teased Kings XI Punjab on social media. There were reports that KL Rahul’s franchise is all set to unveil a new logo and will also come up with a different team name for the upcoming edition of the IPL 2021.  The new logo and team name ahead of the auction. IPL 2021 Team Update: Kings XI Punjab Could Change Their Team Name & Logo Ahead of IPL 2021 Player Auction.

As we all know the player auctions are set to be held on February 18. The auctions will be held in Chennai. It is reported that a day prior to the auctions KL Rahul’s team will unveil the new logo and team name. Amid these rumours, Rajasthan Royals posted a tweet along with a funny meme.

Sending our love to the @lionsdenkxip admin for the coming week. 🙂

The  Kings XI Punjab has retained KL Rahul as the skipper of the team, whereas Rajasthan Royals have named Sanju Samson as the new captain of their side.

(The above story first appeared on LatestLY on Feb 11, 2021 08:57 PM IST. For more news and updates on politics, world, sports, entertainment and lifestyle, log on to our website latestly.com).