IPL 2022 Retention: Take a Look at Players Who Are Likely To Be Retained by the Franchises

Fans would be buzzing and getting excited over their favourite franchises retaining some players and letting go of some with the IPL 2022 Retentions taking place today at 9:30 pm IST. This article explores the possibilities of franchises retaining certain players based on reports. 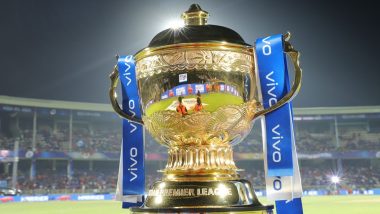 The retentions for the Indian Premier League ahead of the 2022 season are finally here and fans would get to witness all eight franchises pick the players they want to build a team around, alongside letting go of some others. No franchise has not yet made any official announcement about the players they have picked to retain. The Indian Premier League retentions would be telecasted live on Star Sports and fans can live stream the event on the Disney+Hotstar app. IPL 2022 Retention Live Streaming Online: Get Telecast Time Details and Updates of Players Retained By Indian Premier League Franchises Ahead Of Mega Auction

Among the big names that have reportedly been retained are MS Dhoni (CSK), Virat Kohli (RCB) and Rohit Sharma (MI). In this article, we shall take a look at all four likely retentions for every franchise as they plan to invest in the correct players that would take the side forward alongside strategising for players to go after, in the Mega Auction.

1) Chennai Super Kings: Let's start with the 2021 champions. MS Dhoni's men were absolutely a class apart this year, in the competition as after a horrible 2020, they made it to the top once again and it was an overall team effort, right from the start which made their dreams and aspirations of winning a fourth title, possible. Dhoni struck magic with the captain's hat once again as CSK emerged champions in an exciting final against Kolkata Knight Riders a month ago, in Dubai. They have reportedly retained Dhoni, IPL 2021 Orange Cap winner Ruturaj Gaikwad, English all-rounder Moeen Ali and Indian ace Ravindra Jadeja.

2) Kolkata Knight Riders: Next up, we have the Kolkata Knight Riders. This franchise cut a sorry figure for themselves in the first half of IPL 2021 which had to be postponed owing to the second wave of COVID in the country. But when the IPL resumed in September, Eoin Morgan's men emerged as the team to beat. As a matter of fact, they were clinical all throughout and despite finishing fourth in the table, they made it through to the final to almost cap off one of the most dramatic turnarounds in IPL history. All-rounder Venkatesh Iyer was one player who, along with Shubman Gill changed the way KKR batted in the powerplay. Despite Morgan's incredible leadership, KKR are very unlikely to keep him back due to the restrictions with retentions. Reports have claimed that they have chosen to release Shubman Gill as well. IPL 2022 Player Retention: David Warner Confirms Exit from Sunrisers Hyderabad, Says ‘They Won't Retain Me’

3) Delhi Capitals: The rise of Delhi Capitals as a potent force in the IPL has been one of the biggest highlights in the IPL in the past few years and this year too, they were no less. As a matter of fact, Rishabh Pant did a spectacular job in not only leading the side to a top-of-the-table finish but also taking them to the second qualifier where Kolkata Knight Riders got the better of them in a very closely-fought contest. A few days ago, reports emerged that they have narrowed down on Prithvi Shaw, Rishabh Pant, Axar Patel and Anrich Nortje which means that they would leave the likes of Shreyas Iyer, Kagiso Rabada, Ravichandran Ashwin and also Shikhar Dhawan--unless they buy them back in the Mega Auction.

4) Royal Challengers Bangalore: This team too performed well last season and despite showing a lot of promise, failed to deliver when it mattered the most. Virat Kohli's side was one of the favourites to win the title despite a rocky start to life in the second phase of IPL 2021 but they still managed to finish third and reach the Eliminator, where Kolkata Knight Riders proved to be the thorn in their stride. Skipper Kohli would relinquish his captaincy as he announced before and reports have emerged that the franchise has chosen to retain star Australian all-rounder Glenn Maxwell, who was terrific for the Bengaluru franchise last season. RCB have reportedly opted to retain just two players, thereby leaving out the likes of Yuzvendra Chahal, Harshal Patel, Mohammad Siraj, Washington Sundar, Devdutt Padikkal and Wanindu Hasaranga among others.

5) Mumbai Indians: The five-time IPL champions had a season to forget this year as they failed to even qualify for the playoffs. They did show a lot of fight towards the end of the UAE leg but inconsistency in both batting and bowling led to them being dismissed off early in the competition. Retaining four players, like other teams, would definitely have been a challenge for them given the talent they possess. But recent reports claim that they have picked only two-Rohit Sharma and Jasprit Bumrah as their retained players, releasing Kieron Pollard, Suryakumar Yadav, Trent Boult, Ishan Kishan and Hardik Pandya amongst others.

6) Rajasthan Royals: Rajasthan Royals show a lot of promise each year but consistently fail to make the most out of that as the competition progresses. They have an able skipper in Sanju Samson but apart from him and a few others, the team as a unit have failed to fire at all times, making the inaugural champions a rather easy opposition to play against. They hold that surprise element though, defeating big teams in unexpected circumstances but sadly that is not enough to clinch the title. A new core is what they would look at and that's probably why they have chosen to only retain Samson as per reports.

7) Punjab Kings: Big names. But hardly any result to show for. This has been Punjab Kings' story in the IPL for some years now. They always stack up some of the best T20 players like Mayank Agarwal, KL Rahul, Chris Gayle, Mohammad Shami but their results tell a different story altogether. A good part of their performance always depends on skipper Rahul and their overdependence on him is what has backfired. Also, several reports claimed that Rahul would part ways with this franchise and head to the Mega Auction, preferably to get picked by Lucknow. What is also interesting is that they have reportedly chosen to not retain any player.

8) Sunrisers Hyderabad: A David Warner-less Sunrisers Hyderabad did not fare well in the last season and although captain Kane Williamson was an inspirational figure not just with the bat but also with the leaders' hat, this side was one of the most underperforming ones in IPL 2021. No wonder they finished bottom of the table. Reports say that they have retained only Kane Williamson and let go of players Manish Pandey, Rashid Khan, Jason Holder and also young stars like Umran Malik and Abdul Samad.

All said and done, these are based on reports and speculations and as said before, no team has officially announced their four retentions ahead of the IPL 2022 Mega Auction. A lot of surprises, heartbreaks and joy await cricket fans!

(The above story first appeared on LatestLY on Nov 30, 2021 02:20 PM IST. For more news and updates on politics, world, sports, entertainment and lifestyle, log on to our website latestly.com).