Jacques Kallis Birthday Special: From 89 vs KXIP to 72 Against MI, Best IPL Performances by the Former KKR and RCB All-Rounder

Hailing from Cape Town, Jacques Kallis was a complete package, and his records in all forms of cricket are nothing but staggering. Kallis possessed the ability to play marathon knocks and his ability to take wickets regularly made him a captain’s delight. 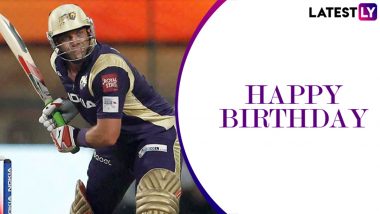 Perhaps the greatest all-rounder to have ever taken the cricket field, Jacques Kallis celebrates his 46th birthday on Friday (October 16, 2020) and wishes are pouring in for him from all around the world. Hailing from Cape Town, the South African star was a complete package, and his records in all forms of cricket are nothing but staggering. Kallis possessed the ability to play marathon knocks and his ability to take wickets regularly made him a captain’s delight. The Proteas all-rounder also made a mark in the Indian Premier League (IPL) where he played for Kolkata Knight Riders (KKR) and Royal challengers Bangalore (RCB). Jacques Kallis, Lisa Sthalekar, Zaheer Abbas Inducted into ICC Cricket Hall of Fame.

Kallis’ IPL career went underway with RCB in the inaugural 2008 season. He delivered several spectacular performances for the franchise and also guided them to several victories. The Proteas legend remained a vital cog of the team for three years before moving to KKR in 2011. Despite being in the latter half of his career, Kallis continued to shine and played a crucial role in guiding Kolkata to two titles in 2012 and 2014 respectively. Speaking of his numbers, Kallis has 2427 runs and 65 wickets in 98 games. As the legendary cricketer turns a year older, let’s revisit some of his best knocks in IPL. Ben Stokes Joins Elite List of All-rounders Like Jacques Kallis, Ian Botham & Garry Sobers.

Chasing a mountain of 204 runs at the M Chinnaswamy Stadium, Royal Challengers Bangalore got off to a flying start courtesy Kallis’ fireworks. From Irfan Pathan to Sreesanth, the right-handed batsman smashed all the bowlers to the cleaners and pushed Punjab out of the contest. He remained unbeaten at 89 off just 55 deliveries as RCB comfortably won the game by eight wickets.

The Jaipur tracked seemed like favouring the bowlers as Rajasthan Royals could only manage 159/4 while batting first. However, that wasn’t the case when KKR came onto bat. After the early departure of Manvinder Bisla, Kallis joined forces with skipper Gautam Gambhir, and since then, it was one-way traffic. Riding on Kallis’ spectacular half-century, KKR registered an emphatic nine-wicket triumph.

The Proteas legend certainly aged like fine wine and his knock against Mumbai Indians is a proof of the fact. Batting first in Abu Dhabi, KKR lost skipper Gautam Gambhir for a duck and were on the back foot. However, Kallis rose to the occasion and played a terrific knock. Despite losing wickets at another end regularly, the opener didn’t put his guards down as KKR went on to win the encounter by 41 runs.

Kallis hung up his boots in 2014, and an illustrious career came to an end. He went on to join KKR as head coach in 2015, and under his guidance, the Men in Purple and Gold reached playoffs in three successive seasons. The talisman, however, part ways with the team after the 2019 season.

(The above story first appeared on LatestLY on Oct 16, 2020 08:30 AM IST. For more news and updates on politics, world, sports, entertainment and lifestyle, log on to our website latestly.com).