Although Ben Stokes played an entertaining 82-run knock in the first India vs England Test, the southpaw could have been dismissed for a duck if a yorker from Jasprit Bumrah had hit the bull’s eye. Seeing Stokes’ trouble early in the innings, Bumrah fired in a toe-crushing yorker, aiming to rattle the stumps but missed his mark just by an inch. 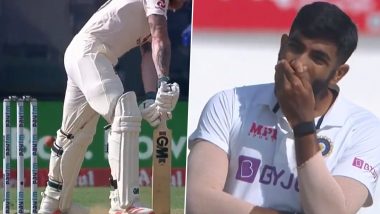 Although Ben Stokes played an entertaining 82-run knock in the first India vs England Test, the southpaw could have been dismissed for a duck if a yorker from Jasprit Bumrah had hit the bull’s eye. The southpaw, who came onto bat on the second day, looked uncomfortable initially at the MA Chidambaram Stadium in Chennai. Seeing Stokes’ trouble, Bumrah fired in a toe-crushing yorker, aiming to rattle the stumps. Although the delivery deceived the left-handed batsman, he somehow managed to put the bat on the ball to extend his stay at the crease. Joe Root Becomes First Batsman in History to Score Double Century in His 100th Test Match.

Notably, the Indian pace spearhead had dismissed England opener Dominic Sibley with a similar delivery on Day 1. He tried to get Stokes out using the same tactic on the second day but missed the mark by an inch.  The left-handed batsman later settled his feet on the wicket and played a sensational knock. With the help of 10 boundaries and three massive sixes, he scored 82 off just 118 balls. The all-rounder even looked set to register his 11th Test ton, but he fell prey to left-arm spinner Shahbaz Nadeem while trying to go for another big hit. Meanwhile, let’s look at how he negotiated Bumrah’s impeccable yorker. India vs England 1st Test 2021 Score Updates Day 2.

Meanwhile, England skipper Joe Root brought up his fifth double hundred on Day 2, pushing the home team further on the back foot. The Three Lions have already crossed the 500-run mark and are aiming to post an even more daunting total. All eyes are on dasher Jos Buttler who is the last of the recognized batsman on the crease. On the other hand, India need to take the remaining four wickets as soon as possible to minimize the damage.

(The above story first appeared on LatestLY on Feb 06, 2021 03:53 PM IST. For more news and updates on politics, world, sports, entertainment and lifestyle, log on to our website latestly.com).