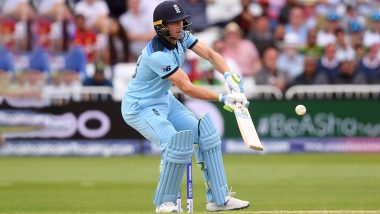 England is playing Pakistan in the match no 6 of ICC Cricket World Cup (CWC), 2019 at Trent Bridge in Nottingham. Jos Butler becomes the second batsman in today's game to score a century. Before this we saw Joe Root scoring hundred, however, he got out on 107 from 104 balls by Shadab Khan.  Butler scored the century from 76 balls, he played a blistering knock of 103(76) before getting dismissed by Mohammad Amir. Butler becomes the English batsman to score fastest hundred in CWC tournament as he surpasses another English batsman Kevin Pietersen. Pakistan vs England Live Cricket Score 6th ODI Match.

Butler 100 gives hope to the English Side!!!

His 75-ball ton has given England a fighting chance of chasing a World Cup record 349. pic.twitter.com/0C6X7uZJQt

England did not start their chase well as they lost both their openers Jonny Bairstow and Jason Roy in first 10 overs. Eoin Morgan also got dismissed cheaply on 9 runs by getting bowled by Mohammad Hafeez. It was then followed by the dismissal of first match hero Ben Stokes who fell prey to Shoaib Malik.

However, Jos Butler and Joe Root partnership of over 100 runs bought them back in the game. The game is still evenly poised as Moeen Ali is still on the crease.

Pakistan will have to get rid of Moeen Ali soon, if they want to win this match. But for that, they will have to take catches, as Sarfaraz Ahmed missed caught behind the chance of Moeen on Shadab's delivery.

(The above story first appeared on LatestLY on Jun 03, 2019 10:56 PM IST. For more news and updates on politics, world, sports, entertainment and lifestyle, log on to our website latestly.com).