The IPL 2020 is now less than a month away and the teams have already reached Abu Dhabi for the upcoming edition of the tournament. The team is quarantined but the physios and coaching staff have made sure to keep the KKR squad in the best of shape and thus the players have started sweating it out in their respective rooms 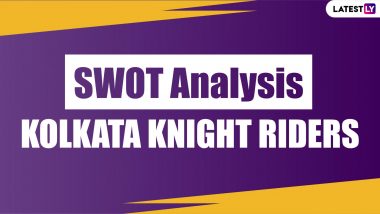 The IPL 2020 is now less than a month away and the teams have already reached Abu Dhabi for the upcoming edition of the tournament. The team is quarantined but the physios and coaching staff have made sure to keep the KKR squad in the best of shape and thus the players have started sweating it out in their respective rooms. The team management keeps an eye on the players through video conferencing and the players too are sweating it out religiously. Now, ahead of the IPL 2020 tournament, we bring you the SWOT analysis of the team KKR. Most Followed IPL Team on Instagram: MI, CSK, RCB, KKR and Others, Here Are Rankings Of Indian Premier League 2020 Franchises Based on Followers.

The team had to let go of Chris Lynn but have signed English cricketer Tom Banton who has been quite exceptional in the Big Bash League. He represented Brisbane Heat and scored 223 runs from seven matches. He could be an ideal pair with Sunil Narine in the opening slot. The team also has names like Nitish Rana, Shubman Gill and the experience of Eoin Morgan and Dinesh Karthik. Andre Russell's explosive batting, in the end, would be suitable for nerve-wracking moments. Alongside the pacers like Prasidh Krishna, Kamlesh Nagarkoti and also Kiwi quick Lockie Ferguson, KKR also picked up Pat Cummins for a price tag of Rs 15.5 crore. With the inclusion of Cummins, the pace department also looks sorted.

Now when we talk about the spin department, the team had a great line-up with the likes of Piyush Chawla and Shakib Al Hasan. Chawla is now with Chennai Super Kings and brought in Pravin Tambe. But the former Rajasthan Royals spinner might not feature in the league for breaching the BCCI’s rules and appearing for the T10 League. Sunil Narine in recent times lacks consistency and is no longer the trump card he used to be once. Kuldeep Yadav had a very poor season in the IPL last year. Varun Chakravarthy lacks IPL experience so we still don’t know much about him.

With Chris Lynn being excluded from the squad, even Shivam Mavi could get into the opening slot alongside Tom Banton or Sunil Narine. The team had let go off Robin Uthappa and now we would have Rahul Tripathi who would be an ideal fit for the Bangalore based batsman.

As mentioned above the spin bowling department lacks depth and looking at the surface of UAE, it is very likely that they would miss one quality spinner. Also, there are no ideal replacements for the key players in case of injury. With the kind of impact the likes of Andre Russell has had on the team, KKR has to make sure that the players are fit.

The IPL 2020 will begin from September 19, 2020, and will be held across three stadiums in UAE. Dubai, Abu Dhabi and Sharjah will be the ones hosting the tournament. For now, the tournament will be hosted within closed doors in the absence of fans.

(The above story first appeared on LatestLY on Aug 25, 2020 05:00 PM IST. For more news and updates on politics, world, sports, entertainment and lifestyle, log on to our website latestly.com).