Most Followed IPL Team on Instagram: MI, CSK, RCB, KKR and Others, Here Are Rankings Of Indian Premier League 2020 Franchises Based on Followers 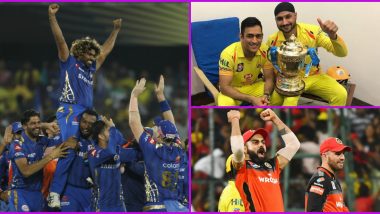 Indian Premier League (IPL) franchises enjoy a huge fan base. Each team has its set of die-hard fans. While some fans do make it a point to support their favourite team in the stadium, some cheer from home in digital space. In today’s age, social media is an essential tool, and IPL teams use it to good effect to connect with their fans. Each of the eight IPL teams- Chennai Super Kings (CSK), Mumbai Indians (MI), Kolkata Knight Riders (KKR), Delhi Capitals (DC), Kings XI Punjab (KXIP), Rajasthan Royals (RR), Sunrisers Hyderabad (SRH) and Royal Challengers Bangalore (RCB)- are present across social media platforms.  IPL 2020 Captains List: From MS Dhoni to Virat Kohli, Check Out Skippers of All 8 Teams in Indian Premier League 13.

On the photo-sharing app, Instagram, all these IPL teams are quite active and have a good number of followers. The respective team accounts try to engage with fans even in the off-season and post photos and videos. Meanwhile, ahead of the IPL 2020 edition, which is set to take place in the United Arab Emirates (UAE), we take a look at each of these teams’ Instagram account and find out which franchise is most followed and popular. IPL 2020: Check out Full List of Coaches & Support Staff of all Eight Teams for Upcoming Edition of Indian Premier League.

Not so surprisingly, Mumbai Indians is the most followed IPL team on Instagram. The record four-time IPL champions have 4.7 million followers as of now. The Rohit Sharma-led side has won the most number of IPL titles- four. MI Squad for IPL 2020 in UAE.

Despite having failed to qualify for playoffs in last three seasons and with no IPL title against their name, Royal Challengers Bangalore is still one of the most followed teams. RCB’s popularity can be attributed to their captain Virat Kohli and AB de Villiers. RCB Squad for IPL 2020 in UAE.

Sunrisers Hyderabad is just behind KKR at number five when it comes to flowers on Instagram. SRH, who have one IPL title against their name, have 1.2 million followers. SRH Squad for IPL 2020 in UAE.

Delhi Capitals is yet another team yet to win an IPL title. The Delhi-based franchise recently changed their name from Delhi Daredevils. With 1.3 million followers, Delhi is at the sixth spot. DC Squad for IPL 2020 in UAE.

Preity Zinta co-owned, Kings XI Punjab is at the seventh spot when it comes to the number of followers on Instagram. Just like, RCB and DC, KXIP has not won any IPL title yet. The Mohali-based franchise has 1.2 million followers. KXIP Squad for IPL 2020 in UAE.

Well, the inaugural IPL champions have the least number of followers on Instagram among IPL teams. Rajasthan Royals have 9,27,375 followers. Maybe a title win in 2020 will help them gain more followers and enter the ‘million followers’ club. RR Squad for IPL 2020 in UAE.

IPL 2020 is scheduled to take place from September 19 onwards and will end on November 10 with the final. Due to coronavirus pandemic, the matches will be held behind the closed doors, and the majority of the fans will have to cheer for their team from homes.

(The above story first appeared on LatestLY on Aug 09, 2020 10:33 PM IST. For more news and updates on politics, world, sports, entertainment and lifestyle, log on to our website latestly.com).