Quinton de Kock (LSG) could be named as the captain of your LSG vs GT Dream11 Fantasy Team, whileas Deepak Hooda (LSG) can be selected as the Vice-captain. 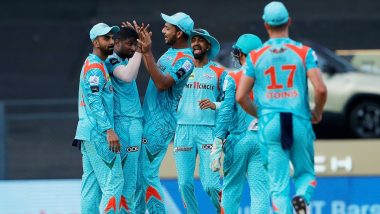 Lucknow Super Giants (LSG) will take on Gujarat Titans (GT) in match 57 of the ongoing Indian Premier League (IPL) 2022. The LSG vs GT clash in IPL 2022 will be played at Maharashtra Cricket Association Stadium in Pune on May 10, 2022 (Tuesday) at 07:30 pm as the teams aim to keep pace for the play-off qualification. Meanwhile, fans searching for LSG vs GT Dream11 Team Prediction for the IPL 2022 clash can scroll down below for all the tips and suggestions on compiling the fantasy playing XI. IPL 2022 Playoffs Qualification Scenario Explained: Here’s a Look at the Chances of GT, RR, SRH, LSG, RCB, PBKS, DC, KKR, and CSK of Making It To Last Four.

The arrival of two new-comers, LSG and GT, in IPL 2022 heated up the competition and both the teams managed to prosper as the table-toppers by winning the maximum number of matches this season. LSG and GT have so far won an equal number of matches with Lucknow Super Giants having slightly better net run rate than Gujarat Titans. Lucknow Super Giants took off the charge from opponents in previous four consecutive matches and upraised on number one of points table displacing their counterpart new-entrant from the position. Gujarat Titans' however, suddenly seem to have lost the focus at the most crucial stage of the tournament as the team lost its previous two matches in a row. Gujarat Titans' played their last match against Mumbai Indians (MI) on Friday in which GT required nine of an over and something that nobody was seeing coming, happened. Daniel Sams bowled an extraordinary over and conceded just four runs to take the table toppers by surprise and defeat them by five runs.

Quinton de Kock (LSG) could be named as the captain of your LSG vs GT Dream11 Fantasy Team, while as Deepak Hooda (LSG) can be selected as the Vice-captain.

(The above story first appeared on LatestLY on May 09, 2022 02:46 PM IST. For more news and updates on politics, world, sports, entertainment and lifestyle, log on to our website latestly.com).