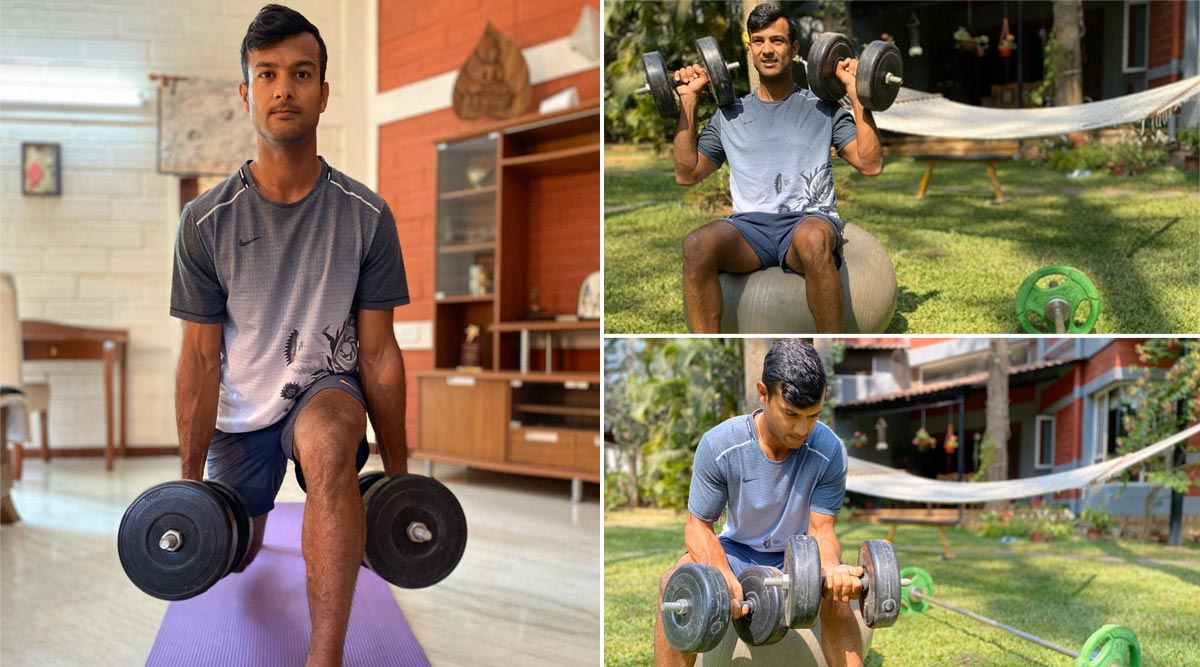 With live sports now far from resuming, sports personalities have started indoor training to keep themselves fit. Gyms and Yoga centres have all shut down in the wake of the coronavirus outbreak, which has already claimed over 14,000 lives and had infected lakhs across the globe, leaving sportspersons without any proper facility to exercise. But Indian opening batsman Mayank Agarwal and team fielding coach R Sridhar have found innovative ways to keep themselves fit amidst the COVID-19 crisis. The team India duo showed fans how to manage their stress levels while also keeping themselves fit sitting at home. Conor McGregor Throws Down Vicious Punches During Quarantine Workout, Henry Cejudo Tells Him to Focus on Grappling Instead.

“#TeamIndia opener @mayankcricket giving us fitness goals from home,” BCCI said in a post, which contained a series of pictures of the 26-year-old opening batsman. Agarwal can be seen exercising with dumbles in a series of pictures. Similarly, in a post from the Indian cricket team’s Instagram handle, Sridhar can be seen lifting plates while lying on the ground. in the video, Sridhar can be seen doing Lower Abs Isometric Hold, which is also called the core strengthening exercise.

Mayank Agarwal Knows How to Keep Himself Fit

Agarwal was last seen in action during the three-match Test series between India and New Zealand in the latter’s home. India were dubbed 0-3 in that series with New Zealand completely outplaying Virat Kohli’s men. Agarwal, however, was among the few batsmen who showed glimpses of form and even hit a fighting half-century.

India’s last series – a three-match ODI series against South Africa - was suspended due to coronavirus. The opening match of the series was washed out due to rain while the two remaining games had to be called due to the rising effect of COVID-19.