MI vs KXIP IPL 2020 Dream11 Team: Jasprit Bumrah, Chris Gayle and Other Key Players You Must Pick in Your Fantasy Playing XI

Mumbai Indians are certainly the overwhelming favourites against Kings XI Punjab. They also lead the head-to-head records with 14 wins in 25 meetings between both these teams. Mumbai have also won seven of the last 10 clashes between both these sides. But Punjab beat a high-flying RCB in their last encounter and will be confident. 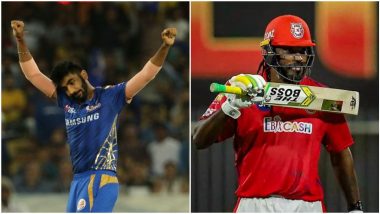 The Mumbai Indians vs Kings XI Punjab game represents two teams at different ends of the spectrum in terms of form and points. Mumbai are flying high at the moment with 12 points in 8 games with five wins on the bounce. There is not one problem at the moment for the defending champions as they look set to dominate Punjab. Minnows Punjab got a win in their last game against Bangalore but need much more than just an odd victory to make the playoffs. With the tournament at the halfway stage and Punjab being rock bottom, they will have absolutely a zero margin of the error now in the coming games. MI vs KXIP Preview: 7 Things You Need to Know About Dream11 IPL 2020 Match 36.

Dream11 fantasy gaming platform is quite popular among cricket fans who select their teams to win some cash. Team selection with best picks is always a winning formula in Dream11. Ahead of the Mumbai Indians vs Kings XI Punjab clash, we take a look at five players who should be part of your fantasy team for the MI vs KXIP IPL 2020 match. MI vs KXIP Dream11 Team Prediction IPL 2020: Tips to Pick Best Fantasy Playing XI for Mumbai Indians vs Kings XI Punjab Indian Premier League Season 13 Match 36

The leading run-scorer of the 2020 IPL, K L Rahul has managed 448 runs at a healthy average of 74.66 so far. It is a real shame that he has not been able to drag his team home over the finish line on a few occasion, but in terms of consistency, K L Rahul has been world-class in the tournament.

The universe boss played his first game of the tournament against Bangalore and hit a fifty straight away. When Chris Gayle swings his bat, there are not many stadiums or many bowling unit that can contain the ferocious West Indian legend.

One of the best wicket-keeper batsman in world cricket at the moment, Quinton De Kock is one of the prized possession of the Mumbai Indians. With 269 runs in 8 games at an average of 39, Quinton De Kock is timing the ball well so far. He will like playing against a Punjab bowling unit that has largely been flat so far.

Senior Kiwi pacer Trent Boult has been a valuable addition to this Mumbai Indians side. In addition to wickets, he is someone the young Indian pacers can learn a lot from. With 12 wickets in 8 games at a decent economy rate of 8, Trent Boult is in good form at the moment.

India’s no 1 fast bowler has hit the ground running in yet another addition of the Indian Premier League with 12 wickets in 8 games. His economy rate is below 8 and this when he regularly bowls in the death. Kings XI Punjab like to score runs at a brisk pace and this is where Jasprit Bumrah should come in handy at stopping them.

Mumbai Indians are certainly the overwhelming favourites against Kings XI Punjab. They also lead the head-to-head records with 14 wins in 25 meetings between both these teams. Mumbai have also won seven of the last 10 clashes between both these sides. But Punjab beat a high-flying RCB in their last encounter and will be confident of a similar result against the defending champions.

(The above story first appeared on LatestLY on Oct 17, 2020 11:06 PM IST. For more news and updates on politics, world, sports, entertainment and lifestyle, log on to our website latestly.com).