As Mohammad Nabi enters the final stage of his career, his son is slowly becoming the latest sensation to emerge out of Afghanistan. Haasan Khan joined the Sharjah academy as a teenager. He reveals cricket helped him settle down away from home. He may train at the Sharjah academy, but Hassan listens to only coaching tips from his father. 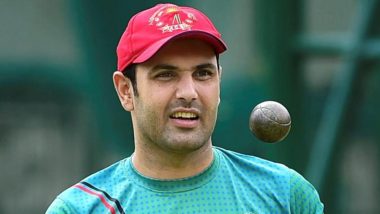 As Afghanistan cricketer, Mohammad Nabi’s illustrious career nears its closing stages, another from his family is on the rise. Nabi has already announced his retirement from Tests and could soon take a call on his white-ball career. But as his illustrious career draws to its fag end, another cricketing career will soon see its dawn. Nabi’s 16-year-old son Hassan Khan is steadily becoming the talk of the town in Sharjah where he trains. Hassan burst into the limelight when he smashed 71 off 30 balls for Bukhatir XI. His knock included seven sixes. India’s Tour to Sri Lanka: Increasing COVID-19 Cases in Island a Worry.

In an exclusive chat with the National News, Hassan looked back on his still young journey and what drew him to cricket. “My first memories of cricket are of watching my dad playing on the TV,” Hassan said. “It makes me feel proud, seeing him and knowing what he has done in cricket, and knowing that my father is a very well-known person in international circles. I don’t feel pressure because of it. I want to follow in his footsteps and play for Afghanistan.” BJ Watling, New Zealand Wicketkeeper, to Retire After WTC Final Against India.

Born in Pakistan, Haasan joined the Sharjah academy as a teenager. He reveals cricket helped him settle down in UAE away from home. He may train at the Sharjah academy, but Hassan listens and adheres to only coaching tips from his father. “I listen to what my dad says first. If another coach gives me some advice, I always verify it with him,” Hassan said. “I share the advice with him and if he says it is a good thing to do, that’s what I’ll do.”

The coaches at the Sharjah academy hold Hassan in high regard. Among them is Kashif Daud, the all-rounder from UAE. “I think he is highly talented,” Daud said while talking of Hassan. “He is blessed with a naturally strong physique. He is a natural athlete with good agility when he is fielding. He is quick on his feet and it is the same with his batting. I feel like he has a great future ahead of him, if he remains focused. I wish him good luck, and pray that the bright future is coming for him.”

(The above story first appeared on LatestLY on May 12, 2021 02:03 PM IST. For more news and updates on politics, world, sports, entertainment and lifestyle, log on to our website latestly.com).