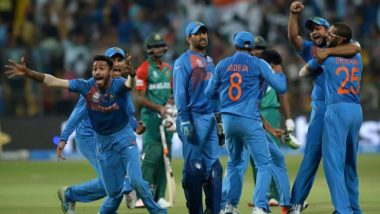 The India vs Bangladesh match in the group stage of ICC T20 World Cup 2016 will go down one of the most thrilling matches in the T20I history. With two runs needing of the last three deliveries of the match, the Bangla Tigers were all set to cause a great upset at the M. Chinnaswamy Stadium in Bangalore. Even, Mushfiqur Rahim, who was well set in the crease, even started celebrating. However, the visitors lost their plot in the last three balls and lost the game by one run. Indian all-rounder Hardik Pandya, who bowled the famous last over in the game, recalled the then Indian captain MS Dhoni’s advice during the crucial final over. Hardik Pandya Says ‘I’ve Had My Best Years Playing Under Mumbai Indians Skipper Rohit Sharma.’

Chasing 147 for victory, the Bangla Tigers needed 11 runs off the last over with Hardik Pandya having the ball in hand. Mahmudullah took a single off the first ball which was followed by two consecutive boundaries by Mushfiqur Rahim. The game looked done and dusted with Bangladesh needing two runs off three balls. However, in order to finish off in style, Rahim gave a catch to Shikhar Dhawan at the deep mid-wicket. Hardik Pandya Picks His All Time IPL XI, Not Rohit Sharma! MS Dhoni Named As Captain.

“Even at that time if I was there (in Mushfiqur’s place) I would’ve taken a single to secure the win and then go for that signature shot or highlights shot. So I was like what was the most difficult ball if anyone wants to take a single?” Pandya said to Cricbuzz.

"I thought back of length is something if you wanna hit it’s not that easy and even if wanna take single it’s difficult, you have to get around and play it properly. But he went for the big shot and got out," he added.

The drama wasn’t over as Mahmudullah also tried to play a glory shot and perished in the next delivery, giving a simple catch to Ravindra Jadeja at deep mid-wicket.

“The next ball I went for the Yorker, it turned out to be a full toss but he also hit it to the fielder. It was just destiny, it happened because it had to happen, I didn’t do anything special there,” said Pandya.

Finally, two runs were needed off the last ball Shuvagata Hom being on the strike. Pandya held his nerves in the crunch situation and bowled a wide ball outside off-stump which the batsman failed to connect. They, however, tried to sneak a run through bye but Dhoni ran out the batsman and as a result, the Men in Blue won the game by one run.

Remembering the encounter, Pandya said that many players were advising him to bowl a bouncer. However, skipper Dhoni and Ashish Nehra asked him to bowl wide outside off stump.

“I don’t remember exactly but few people have suggestions let’s bowl a bouncer but we were not up for it because Mahi bhai (MS Dhoni) and Ashu bhai (Ashish Nehra) also said that if a tail-ender tries to swing and gets a top edge then it could fly over the keeper. So he said let’s just go with wide outside off stump,” Pandya added.

India won that game and following encounter against Australia. However, they lost to eventual champions West Indies in the semi-final of the tournament by seven wickets.

(The above story first appeared on LatestLY on Jun 10, 2020 11:17 AM IST. For more news and updates on politics, world, sports, entertainment and lifestyle, log on to our website latestly.com).