MS Dhoni Shows Another Glimpse of His Selfless Nature, Gives Away Business Class Seat to CSK Team Director During Flight to UAE for IPL 2020 (Watch Video) 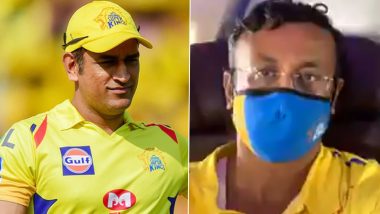 MS Dhoni is a selfless cricketer. Stories of his selfless nature and how he always puts the team before his own interest have been told and retold by several cricketers and Dhoni’s associates in the past. The former Indian captain is admired globally for always looking out for others before himself. On Friday, the Chennai Super Kings (CSK) skipper gave another glimpse of his selfless nature and showed just why he is one of the most loved cricketers going around globally. The 39-year-old gave up his own business-class seat to CSK team director K George John and sat in the economy class while the team was travelling to UAE for IPL 2020. IPL 2020 Update: MS Dhoni’s Brilliant Six in CSK Training Prompts Whistle Celebration From Suresh Raina (Watch Video).

Dhoni and CSK flew to the United Arab Emirates on Friday to start their preseason camp ahead of the Indian Premier League season 13. With IPL 2020 set to begin from September 19, teams have already reached the middle-east country to begin their preseason camps and prepare for the upcoming edition of the IPL. IPL 2020 Team Update: Chennai Super Kings Share Pictures of MS Dhoni, Suresh Raina Ready for UAE Sojourn.

When a man who’s seen it all, done it all in Cricket tells you, “Your legs are too long, sit in my seat (Business Class), I’ll sit in Economy.” The skipper never fails to amaze me. @msdhoni pic.twitter.com/bE3W99I4P6

George later took to Twitter to share the incident and wrote: “When a man who’s seen it all, done it all in Cricket tells you, “Your legs are too long, sit in my seat (Business Class), I’ll sit in Economy.” The skipper never fails to amaze me.” K George was struggling to seat comfortably in the economy class seat due to his long legs. But Dhoni made sure that like everyone else Mr George too found a comfortable seat and relaxed while travelling. He is “Thala” for a reason.

Dhoni announced his retirement from international cricket on August 15 through an Instagram post sending the entire country into a shock. But the 39-year-old will be playing the IPL and will lead CSK in IPL 2020 as they aim to take revenge of the final defeat last season and capture a record fourth IPL title.

(The above story first appeared on LatestLY on Aug 22, 2020 11:24 AM IST. For more news and updates on politics, world, sports, entertainment and lifestyle, log on to our website latestly.com).