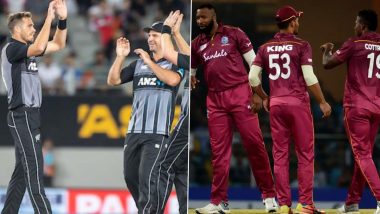 New Zealand will eye a series-clinching win while West Indies will hope to bounce back from the defeat in the first match when they both clash in the 2nd T20I match on November 29 (Sunday). New Zealand vs West Indies match will be played at the Bay Oval in Mount Maunganui. The Kiwis, led by Tim Southee in regular captain Kane Williamson’s absence, beat West Indies by five wickets in a rain-affected game and will hope to carry on the momentum while Kieron Pollard’s side will want to level the series. Meanwhile, fans in India searching for the live telecast and live streaming online details for the NZ vs WI 2nd T20I match should scroll down for all information. NZ vs WI Dream11 Team Prediction: Tips to Pick Best Fantasy Playing XI for New Zealand vs West Indies 2nd T20I 2020.

Pollard played a magnificent innings to take West Indies to 180/7 in 16 overs after the visitors were reduced to 59/5 in the fifth over. Pollard’s innings of 75 from 37 deliveries was studded with eight sixes and four boundaries. But his bowlers failed to defend the score as they suffered a five-wicket defeat with New Zealand chasing down the score with four deliveries to spare. West Indies Unveils New Jersey for T20I Series Against New Zealand As Countdown Begins for ICC Men's T20 World Cup 2021.

Fans in India will not be able to live telecast New Zealand vs West Indies 2nd T20I match as there are no official broadcasters available for the series in the country. But live-action of NZ vs WI 2nd T20I match will be available online.

Fans can follow the live streaming of New Zealand vs West Indies 2nd T20I match on FanCode mobile app. Fans, however, will have to pay a nominal subscription fee to watch the live streaming of NZ vs WI game. Users will have to pay Rs 15 for match pass or Rs 29 for NZ vs WI T20I Series 2020 pass also known as the season pass to catch the live-action.

(The above story first appeared on LatestLY on Nov 28, 2020 11:27 PM IST. For more news and updates on politics, world, sports, entertainment and lifestyle, log on to our website latestly.com).