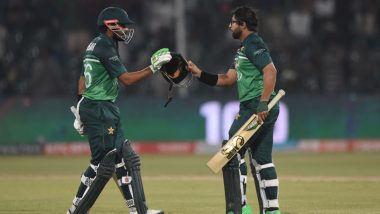 Multan, June 9 : Skipper Babar Azam (103) struck a fine century while Imam-ul-Haq (65) and Mohammad Rizwan (59) scored fifties to help Pakistan overcome West Indies by five wickets in the first One-day International at the Multan Cricket Stadium here. Azam was at his brilliant best while Imam-ul-Haq gave him good company as they raised 103 runs for the second wicket. He then added 108 runs for the third wicket with Rizwan before Khushdil Shah (41 not out off 23 balls) sealed victory with a late cameo as Pakistan did enough to sneak past Shai Hope and the West Indies. PAK vs WI 1st ODI 2022 Video Highlights: Babar Azam, Khushdil Shah Help Pakistan Take 1-0 Lead.

Hope scored 127 to help West Indies reach 305/8 in 50 overs but with Babar and his boys standing tall, Pakistan reached 306.5 in 42.9 overs to win the first match of the series. Babar Azam continued to make a mockery of opposition bowlers and the Pakistan captain was at it again on Wednesday night as he helped himself to yet another ODI century. It was Babar's third century on the trot and it also meant he becomes the first player in the history of ODI cricket to score three consecutive centuries on two separate occasions, said a report on the ICC's official website.

Babar's innings also saw him become the quickest player to notch 17 ODI centuries and the fastest to complete 1,000 ODI runs as captain. His 103 came off 107 balls and was studded with nine fours. The 27-year-old who is seemingly still on the improve has recently targeted becoming the first player to be ranked No.1 in all three formats of the game. Babar wasn't the only player to reach three figures in Multan, with West Indies opener Shai Hope scoring his 12th ODI century with a stylish 127 that helped the Caribbean side post a highly competitive score of 305/8. IND vs SA 1st T20I 2022, Delhi Weather, Rain Forecast and Pitch Report: Here’s How Weather Will Behave for India vs South Africa Match At Arun Jaitley Stadium.

While Hope's innings is unlikely to receive the same amount of plaudits as Babar's, it was a knock of a similar class and really laid the platform for West Indies' big total. Hope smashed 15 fours and one massive six during his 134-delivery stay, with his 154-run stand with No.3 Shamarh Brooks a particular highlight. It looked like Pakistan's run chase was going to prove futile when Babar and Mohammad Rizwan were dismissed in quick succession, but finisher Khushdil Shah had other ideas.

The left-hander smashed four sixes and scored an unbeaten 41 during the closing stages of the chase to ensure Pakistan drew first blood in the three-match series. It was only Khushdil's fifth ODI, but he is making a name for himself as a reliable closer after he performed a similar role with aplomb against Australia in March.

(The above story first appeared on LatestLY on Jun 09, 2022 12:41 PM IST. For more news and updates on politics, world, sports, entertainment and lifestyle, log on to our website latestly.com).