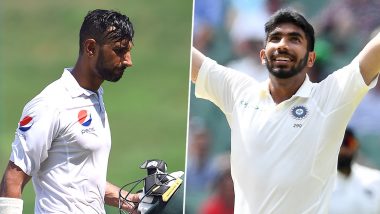 Jasprit Bumrah is considered as one of the best bowlers in the world at the moment if not the best and Pakistan batsman Shan Masood recently said that he would relish an opportunity to play against the Indian speedster. The left-handed batsman made his debut for the national side in 2014, but only recently has been able to get a continuous run in the side in the longest format while also debuting in One-Day internationals. 'Asked Virat Kohli to Get Him': Parthiv Patel Reveals How RCB Missed on Signing Jasprit Bumrah.

Jasprit Bumrah broke through in 2013, and since his debut a couple of years later has been the mainstay in Indian national team, spearheading their bowling attack in all three formats. The 26-year-old is among the top 10, in ICC’s bowler’s rankings in Tests and ODIs. KL Rahul Picks Jasprit Bumrah As the Toughest Bowler to Keep To.

Shan Masood has played 20 Tests for Pakistan, scoring at an average of 31 while in 12 matches, Bumrah has taken 62 wickets. Despite a difference in their numbers, Shan Masood says he is eager to face the Indian pace machine on the field.

During an interview with Cricast on Youtube, the 30-year-old was asked about the bowlers he would like to face. In his response, the Pakistani batsmen said ‘I think when we talk about fast-bowlers around the world; I have never played against Bumrah. That is a challenge that I would want to take on.’

Recently cricketers like Shoaib Akhtar put forth a proposal about a series between Indian and Pakistan behind closed doors to raise funds for coronavirus victims. However, there were no concrete steps taken towards it by either of the cricketing boards. So Masood might have to wait for some more time if he wants to face Bumrah on 22 yards.

(The above story first appeared on LatestLY on May 25, 2020 07:28 PM IST. For more news and updates on politics, world, sports, entertainment and lifestyle, log on to our website latestly.com).