Pakistan vs Bangladesh Test Series 2020, Key Players: Naseem Shah, Tamim Iqbal, Babar Azam and Other Cricketers to Watch Out for

Pakistan’s premier Babar Azam is one of the most consistent batsmen going around and hence, the home side will expect him to continue his great run and guide the hosts to a win. Other than him, Azhar Ali and Abid Ali looked in good knick in Pakistan’s 1-0 Test series against Sri Lanka. 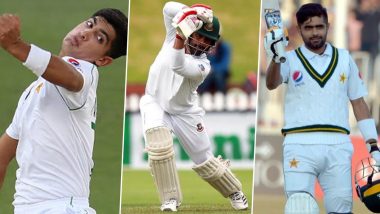 After the three-match T20I series, Pakistan and Bangladesh will now lock horns in the two-match Test series. The first Test will be played at the Rawalpindi Cricket Stadium in Rawalpindi and will get underway on February 7. The home side won the three-match T20I series 2-0 and will step into the Test matches with high confidence. However, Test cricket is a different ball game altogether and the Bangla Tigers should try to make a stunning comeback. Well, both the sides consist of players who can guide their side to a win and below, we’ll look at some of them. Pakistan Vs Bangladesh, Cricket Score 1st Test Match.

Pakistan’s premier Babar Azam is one of the most consistent batsmen going around and hence, the home side will expect him to continue his great run and guide the hosts to a win. Other than him, Azhar Ali and Abid Ali looked in good knick in Pakistan’s 1-0 Test series against Sri Lanka. On the other hand, the Bangla Tigers will rely upon veterans like Mahmudullah and Tamim Iqbal to change the fortunes of the side and guide them back to winning ways. Meanwhile, let’s look at some key players from the upcoming matches. Pakistan vs Bangladesh 1st Test Dream11 Team Prediction.

The talented batsman has become a mainstay of the Pakistani batting line-up in all the formats of the game and hence, the opposition should vary him. Azam also struck a half-century in the second T20I and will be eyeing to put up an even more significant score in the Test Series.

The 30-year old southpaw has a ton of experience behind him and has the onus to give his side a great start. Iqbal has the ability to tackle the swing from the brand new red-cherry. Hence, getting red of him will not be a bread and butter task for the Pakistani pacemen. Even, he recently scored a triple-hundred in First-Class cricket and let’s see if he can continue his good run.

The 16-year old pacer has always been in the limelight ever since his debut match. Shah can set the speed gun on fire and also possess the ability to exploit the reverse swing from the semi-new ball. He will certainly eye to put up a good show against the visitors and the Bangladesh batsmen need to be careful against him.

In the absence of Mushfiqur Rahim, Mahmudullah’s responsibility in the middle-order will increase and his performance will also be critical in his side’s success. Nevertheless, the all-rounder is a veteran of 48 Test matches and knows very well, how to handle the pressure. Along with being a dependable batsman, Mahmudullah is a useful off-spinner too and he might have to chip in with few overs.

The right-handed opener has played a couple of magnificent knocks early in his career and is touted to be a great prospect for the future. In fact, he is the only batsman in the history to have registered a century in both ODI and Test debut. So, the World certainly knows about Ali’s skills and let’s see what he can offer against Bangladesh.

Going into the series, one might consider Pakistan as the favourites to win the first Test match and the series too. However, Bangladesh also have the services of some players who can change the course of the match single-handedly.

(The above story first appeared on LatestLY on Feb 06, 2020 11:45 AM IST. For more news and updates on politics, world, sports, entertainment and lifestyle, log on to our website latestly.com).