Sarfaraz Ahmed's Quetta Gladiators would hope for a fresh start to the season after a horrible performance last year. They would be up against last year's finalists in Peshawar Zalmi. Continue reading to get live streaming and telecast details of the match. 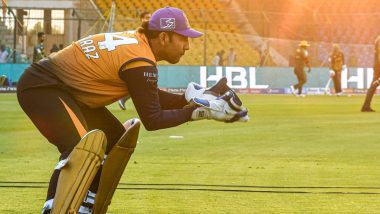 Quetta Gladiators would open their PSL 2022 campaign against Peshawar Zalmi on Friday, January 28. The match would be played at the  National Stadium in Karachi and is set to start at 8:30 pm IST (Indian Standard Time). Quetta Gladiators would be keen on bringing about a turnaround in their fortunes after a horrible season last time. They finished last in the points table last season with just two wins in 10 matches. The Sarfaraz Ahmed-led side had just two wins to their name. They have been handed a huge blow with star player Shahid Afridi, testing positive for COVID-19. Big Bash League 2021–22 Final: Perth Scorchers Beat Sydney Sixers by 79 Runs To Win Title

Peshawar Zalmi had made it to the final last season where they lost to Multan Sultans. They would hope to maintain that momentum with the start of the new season. Let us take a look at live streaming and telecast details of the match.

Quetta Gladiators vs Peshawar Zalmi match will be played at the National Stadium in Karachi. The game is scheduled to be held on January 28, 2022 (Thursday) and will begin at 07:30 pm IST (Indian Standard Time).

Fans in India can watch the live telecast of the Quetta Gladiators vs Peshawar Zalmi clash on Sony Sports channels. Sony Pictures Sports Network are the official broadcasters of Pakistan Super League 2022 in India. So fans need to tune into Sony Sports channels to watch the match live on their television sets.

(The above story first appeared on LatestLY on Jan 28, 2022 07:50 PM IST. For more news and updates on politics, world, sports, entertainment and lifestyle, log on to our website latestly.com).