Rohit Sharma Just Needs to Give the Bowler 1st Half Hour in Tests, Says Nasser Hussain 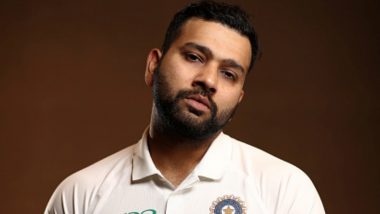 London, June 22: Former England captain Nasser Hussain believes star India opener Rohit Sharma, who is a favourite cricketer of many contemporary players, has all the capabilities to succeed at the Test level. According to Nasser, all that Rohit needs to do when travelling abroad is to cover his off stump and respect the bowlers for the first half hour of his inning. "If Rohit Sharma is not a Test match opener, I've been watching a different game...If you go and ask fellow cricketers who your favourite player is, a lot of them will say, Rohit Sharma. Fellow cricketers watch Rohit Sharma and say this bloke seems to have so much time to bat," Nasser said in a chat show on Sony Ten's ï¿½Pit Stop'.

Giving example of Virat Kohli, who made amends to his batting style from his disastrous 2014 tour of England and came off with flying colours during the 2018 tour against the Three Lions, Nasser said: "Test match cricket at the top of the order is about having time, it's about having a technique as well. You have to cover your off stump, like Virat (Kohli) did in England against (James) Anderson, the way he left him outside after all his problems of the previous tour, that is a Test match cricketer." Rohit Sharma Hit Quick Boundaries: Cheteshwar Pujara Recalls How Hitman Went After Australian Bowlers During 2018 Adelaide Test.

"And that's the only thing Rohit has to do when he goes away from home and when the ball is moving around. He has to just spend half an hour and say to the bowler you can have this half hour I'm going to leave you, I'm going to take the slip cordon out of play," added the 52-year-old.

Counted among one of the best batmen in limited-overs cricketer, Rohit has only played 32 Test matches so far in his career. The 33-year-old had a great 2019 where he made his debut as Test match opener and went on to score three hundreds, including a double century against South Africa at home.

(The above story first appeared on LatestLY on Jun 22, 2020 05:04 PM IST. For more news and updates on politics, world, sports, entertainment and lifestyle, log on to our website latestly.com).