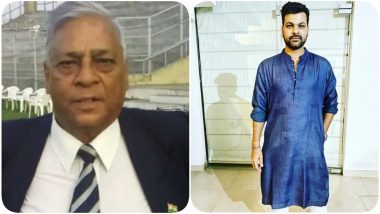 Former Haryana spinner Rajinder Goyal is no more. He passed away today due to a prolonged illness and was 77 years old. The former spinner is survived by his wife and son Nitin Goyal who has been a first-class cricketer. Former Indian pacer Rudra Pratap Singh has mourned the death of the cricketer on his social media account and said that it was unfortunate that he could never don the Indian jersey despite having a prolific record of 750 wickets in 157 matches. Sadly he and  Padmakar Shivalkar are the ones who never played for India. RP Singh 'Grateful' to Social Media After Finding his Old Picture With India U19 Teammates, Asks Netizens to Identify Other Players in the Photo.

RP Singh posted a picture on social media and also spoke about the same record we mentioned above while posting a tweet about his death. "Sad to hear about the demise of #RajinderGoyal ji. He was very unlucky to miss Test cricket despite an exceptional First-class record of 750 wickets in 157 matches!," read the tweet about the former cricketer. He appeared in one of the unofficial matches for India in Ahmedabad in 1964-65 against Ceylon. Check out the tweet below:

Sad to hear about the demise of #RajinderGoyal ji. He was very unlucky to miss Test cricket despite an exceptional First class record of 750 wickets in 157 matches! pic.twitter.com/In9Mnd4MJC

Post his appearance in the unofficial match, it was Bishen Singh Bedi's presence in the team that did not allow him to come back into the team.  Former Board of Cricket Control in India (BCCI) president Ranbir Singh Mahendra also mourned the loss of the cricketer and said, "It is a big loss to me in the game of cricket and personally." We hope that his soul Rests in Peace!

(The above story first appeared on LatestLY on Jun 21, 2020 10:45 PM IST. For more news and updates on politics, world, sports, entertainment and lifestyle, log on to our website latestly.com).