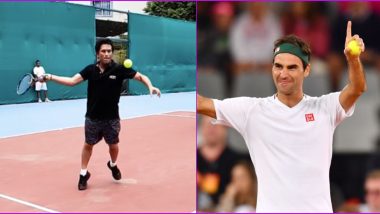 It is not that often we see legendary sports personalities seek tips from one another. But India's legendary cricketer Sachin Tendulkar has sought tips from tennis maestro Roger Federer while sharing a flashback video on Instagram. Tendulkar shared a clip of him playing Tennis. In the slow-motion video, the 47-year-old can be seen playing a forehand shot. "Hey @rogerfederer! Any tips for my forehand? @wimbledon #FlashbackFriday #wimbledon," wrote Tendulkar in the caption of the video. Harbhajan Singh Delighted As Sachin Tendulkar Wishes Happy Birthday to Him in Punjabi (View Post).

While writing the story, there was no comment from Federer, but we are sure the Tennis great will appreciate Tendulkar's forward shot. The two sports greats have in the past mutually admired each other and have had conversations on social media.

Hey @rogerfederer! Any tips for my forehand? 😋🎾 @wimbledon #FlashbackFriday #wimbledon

Tendulkar in the past has on many occasions attended Federer's tennis matches, mostly at the Wimbledon. During the 2017 Wimbledon final, which Federer won, against Marin Cilic, Tendulkar was seen cheering for the Swiss Maestro at the All England Club. At that time, Tendulkar had said that he has been watching "Roger for the last ten years" and is a "down to earth, humble man."

(The above story first appeared on LatestLY on Jul 03, 2020 08:50 PM IST. For more news and updates on politics, world, sports, entertainment and lifestyle, log on to our website latestly.com).