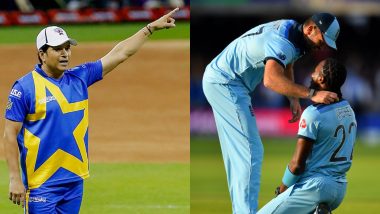 Legendary Indian cricketer Sachin Tendulkar took to social media and shared a video against racism. The video features Jofra Archer's Super Over in England vs New Zealand ICC Cricket World Cup 2019 final at the Lord's Cricket Ground. The video was earlier shared by ICC as well and wrote, "Without diversity, cricket is nothing. Without diversity, you don't get the full picture." Meanwhile, Tendulkar shared the same video with a famous Nelson Mandela quote. Darren Sammy Urges ICC and Other Cricket Boards to Support #BlackLivesMatter to Fight Racism.

"Nelson Mandela once said, 'Sport has the power to change the world. It has the power to unite the world in a way that little else does.' Wise words," tweeted Tendulkar. The video is produced by ICC, and at the end of it, it states, "The ICC stands against racism." George Floyd Death: From Roger Federer, Paul Pogba to Chris Gayle, Here's How Sports Fraternity Reacted to #BlackLivesMatter Protests and Racial Discrimination Movement!

Sports personalities all over the world joined the Black Lives Matter campaign after protests rocked the United States of America following the killing of an Afro-American 46-year-old man George Floyd. Former West Indies captain Darren Sammy had appealed to ICC to take a stand against racism. The game's giving body came up with a video. The video shared by ICC is from the final when Archer, Barbadian-born English pacer, helped England win the World Cup for the first time.

(The above story first appeared on LatestLY on Jun 06, 2020 12:48 PM IST. For more news and updates on politics, world, sports, entertainment and lifestyle, log on to our website latestly.com).