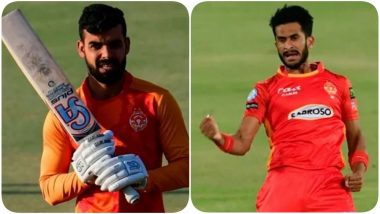 The Pakistan Super League 2021 has been postponed indefinitely due to three more players had been tested positive with COVID-19. Seven players and support staff had been tested positive with the disease already and three more had been diagnosed with COVID-19. With immediate effect, the Pakistan Cricket Board had postponed the league. Now post this announcement, the players were disappointed with the same. Shadab Khan and Hasan Ali took to social media and blamed the evil eye for the postponement of the tournament. PSL 2021 Postponement: Shoaib Akhtar Blasts PCB, Wants PM Imran Khan to Look into Issue.

Both the players took to social media and said that it was the evil eye that led to the tournament getting postponed. “Ya Allah humary psl ko kis ke nazar laga de,” wrote Islamabad United skipper Shadab, while his United teammate Hassan posted, “Nazar lag gi kisi ki humri PSL ko.” Now, let's have a look at he tweets posted by the both the players below:

Prior to this, one of their matches had been postponed by 24 hours as Karachi Kings captain was tested positive with COVID-19. Karachi Kings and Australia player Daniel Christian on Thursday, flew back home because he felt unsafe in the bio bubble. So far only 14 matches have been conducted in the tournament. The PSL 2021 had 34 matches that had to be conducted.

(The above story first appeared on LatestLY on Mar 04, 2021 10:56 PM IST. For more news and updates on politics, world, sports, entertainment and lifestyle, log on to our website latestly.com).