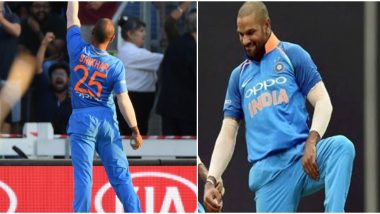 Celebrations in sports often tend to become the identity of the player itself. Many in the sporting world are famous for their popular celebrations right from Cristiano Ronaldo’s iconic ‘sii’ celebration to Sachin Tendulkar looking into the heavens after reaching a milestone. Some others like Shoaib Akhtar or Imran Tahir’s running across the ground in a ‘flying plane’ posture have also become famous celebrations and fans know what will follow every time these bowlers take a wicket. Among such names is Indian opening batsman Shikhar Dhawan, whose ‘thigh-five’ celebration has become quite popular with fans. Shikhar Dhawan Plans to Become Commentator Post Retirement, Says ‘I Will Be Very Good at It’.

In an episode with fellow Indian women’s cricketers Smriti Mandhana and Jemimah Rodrigues on their Double Trouble YouTube show, Dhawan revealed the inspiration behind his popular celebration. Asked about his reason behind his ‘thigh-five’ celebration, Dhawan answered that he had first seen the celebration in Kabaddi matches and liked how raiders celebrated after earning a point. Shikhar Dhawan Has His Say on Playing Behind Closed Doors, Says ‘We Are Going to Miss Playing in Front of Huge Crowd’.

“Whenever I watched Kabaddi, I loved seeing raiders celebrate their point by doing the thigh-five celebration,” said Dhawan. “It was some sort of manly thing and I immediately got hooked to the celebration. We were playing in Australia when I first started doing the celebration. Slowly I got used to it. I enjoy the celebration and do with full heart and art and I am sure even the fans love it,” he added.

The thigh-five celebration is, however, only one of Dhawan's many popular celebrations. popularly called Gabbar in the Indian national cricket team due to his moustache. Dhawan has a popular way of celebrating his centuries.

Dhawan also spoke about his injury problems and how big a blow it is for a cricketer to be ruled out of a tournament like the World Cup due to injury. Dhawan was in good form during ICC Cricket World Cup 2019 and even hit a century against Australia but was ruled out of the tournament after the match due to a thumb fracture.

“When I got injured against Australia and was ruled out of the World Cup. It didn’t disturb me a lot. I accepted it,” Dhawan said. “I work a lot on my emotional health and my processes are strong. I have always healed well from injuries and when I’m doing my rehab or training I always see myself coming back and doing well. I’m always in the happy zone. The more positive my mindset, the better is my recovery,” he added.

(The above story first appeared on LatestLY on May 28, 2020 11:50 AM IST. For more news and updates on politics, world, sports, entertainment and lifestyle, log on to our website latestly.com).