According to the Shikhar Dhawan he got maximum ‘limelight’ in his career when he was ruled out of the ICC Cricket World Cup 2019 owing to a fractured thumb. During India’s group-stage encounter against Australia, Dhawan injured his thumb while batting 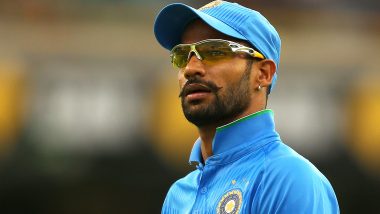 Swashbuckling Indian opener Shikhar Dhawan is known for his ability to go after the bowlers from the outset through which the left-handed batsman has given nightmares to many prominent bowling line-ups. According to the southpaw, however, he got maximum ‘limelight’ in his career when he was ruled out of the ICC Cricket World Cup 2019 owing to a fractured thumb. During India’s group-stage encounter against Australia, Dhawan injured his thumb while batting. He though went on to score a blistering century (117 off 109 balls) and helped his side win the game by 36 runs. However, he couldn’t play any further games in the marquee tournament and young wicket-keeper batsman Rishabh Pant was called up as his replacement. Shikhar Dhawan and Son Zoravar Pose in Delhi Capitals Jersey As They Miss IPL Action (View Post).

"I was, being very honest, sad. When I was batting, I knew I got fractured, I took pain killers... my pain threshold is high... and kept on batting. We won the match. In my whole career, I never got that much of limelight. After the injury, I came back... people were saying 'because of you, you were not there, you were not there'. I saw a lot of positive," Shikhar Dhawan was quoted as saying by India Today. Will Do Thigh-Five Celebrations Looking Towards Cameras for Fans, Says Shikhar Dhawan.

The 2013-Champions Trophy winner further said that he was initially upset after missing the most part of the tournament. However, he didn’t take long in getting recovered. “For me, I knew I gave my best and in that particular moment, I gave my best in a difficult situation. It didn't affect me. I was sad for maybe 5-10 minutes and then I got over with it. That was a reality. You have to change your mindset from expectation to acceptance. Once you have strong acceptance in life, you will ride it very smoothly,” he added.

"I was totally fine. I was happy, went back and had a great time with my family. I was enjoying it and that attitude helped me as well. I came back to the team and started scoring. I was positive, there was no negative thought 'oh this could be my last World Cup'. I don't know but that positivity kept me going," Shikhar Dhawan further opined.

Dhawan’s opening slot went to KL Rahul who put up some decent performances in the quadrennial tournament. Virat Kohli and Co finished the round-robin stage at the top of the points table. However, the Men in Blue faced an 18-run defeat against New Zealand in the semi-finals and got eliminated from the tournament.

(The above story first appeared on LatestLY on Jun 20, 2020 10:20 AM IST. For more news and updates on politics, world, sports, entertainment and lifestyle, log on to our website latestly.com).