Former Pakistan pacer Shoaib Akhtar also congratulated James Anderson for completing 600 Test wicket. However, his message didn’t go down well with several fans, who slammed him for calling the talisman a ‘medium-fast bowler.’ The Lancashire-born cricketer used to bowl at the very high pace in the initial half of his career but his speed went down with time. 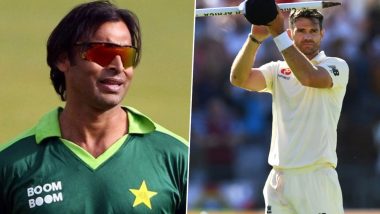 The Lancashire-born cricketer used to bowl at the very high pace in the initial half of his career. With passing time, however, his speed went a bit down, but he continued to torment the batsmen with his accuracy and ability to swing the ball both ways. Due to the fact, fans were not happy with Akhtar’s remarks. Let’s look at how they reacted.

Once again proving how self obsessed Shoaib is !! Can not digest the fact that someone could do better than him. What an absolute disgrace @shoaib100mph !! Shame !!

Indeed this is Achievement Akhtar otherwise there are 100mph bowler being smashed for 4s and 6s by tailenders. Hope you remember.

he is medium fast bowler but he is a great bowler. At the age of 38 still he is contributing for his team while our bowlers wants to play in leagues & u R running youtube channel

You can't even compliment someone properly. 'Medium Fast Bowler'. He lasted 20 years, with less talk. Took 600 wickets. A bit of grace won't hurt.

And 140kph in red ball is considered as medium fast 😂🤣 pic.twitter.com/VrVMEfxc9f

@shoaib100mph if you call your self very very fast bowler but you not reach at least 450 international wicket. You stopped on 444 wicket and @jimmy9 has 600 in test only and called him " MEDIUM FAST BOWLER " 🤣🤣

Speaking of Anderson, the pacer might have scripted history but is still determined to add several many more feathers to his already illustrious hat. The legendary bowler has made it crystal clear that he’s not in the mood to hang up the boots anytime soon and is aiming to feature in Ashes 2021 which is scheduled to take place in Australia. Also, on being asked about getting 700 Test wicket, Anderson responded: “Why not.”

(The above story first appeared on LatestLY on Aug 26, 2020 10:42 PM IST. For more news and updates on politics, world, sports, entertainment and lifestyle, log on to our website latestly.com).