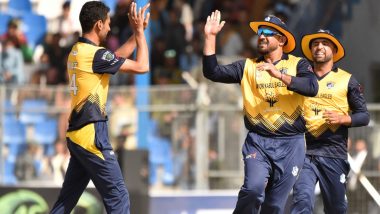 In an unusual chain of events at the recently concluded Afghanistan’s Shpageeza Cricket League, the owner of Kabul Eagles made his debut in the league. 40-year-old Abdul Latif Ayobui, played in the final league game of the tournament against Speen Ghar Eagles at the Kabul International Cricket Stadium, as his team had already secured a place in the play-offs. Dawlat Zadran Uses Mankading to Dismiss Noor Ali Zadran in Shpageeza Cricket League 2020 (Watch Video).

However, the debut didn’t go exactly as planned for Abdul Latif as he was banned from the rest of the tournament by the Afghanistan board for misbehaviour a day later. The Kabul Eagles owner, on his debut, bowled juts one over the clash. A medium-fast bowler, Laytiff gave 16 runs in his solitary over as Tigers put on a score of 142/8.

But Kabul Eagles were able to chase the target with a couple of over to spare. However, despite a winning debut, Laytiff was suspended from attending the rest of the tournament due to the violation of Articles 9 & 18 of the ACB Disciplinary code which deals with misbehaviour with staff or players, foul language and damaging property. The 40-year-old was also fined 30000 AFNs for his actions.

@TheKabulEagles franchise owner Ab.Latif Ayobi is banned from attending the remainder of #Etisalat4GSCL2020 & fined 30000 AFNs for violation of Articles 9 &18 of the ACB Disciplinary Code which deals with misbehavior with Staff or players, using foul language & damaging property.

Kabul Eagles made it to the finals of the competition against Mis-e Ainak Knights which was played on Wednesday (September 16, 2020). The Eagles were asked to bats first and riding on cameos from Younas Ahmadzi and Samiullah Shinwari, mange to out pot up fighting soccer of 139 in their 20 overs, which they defended.

This is the second time that the Kabul Eagles have won the coveted trophy and for the first time under the leadership of young Rahmanullah Gurbaz. The franchise first won the competition back in 2016 and are tied with Speen Ghar Tigres for most title wins.

(The above story first appeared on LatestLY on Sep 17, 2020 11:28 AM IST. For more news and updates on politics, world, sports, entertainment and lifestyle, log on to our website latestly.com).