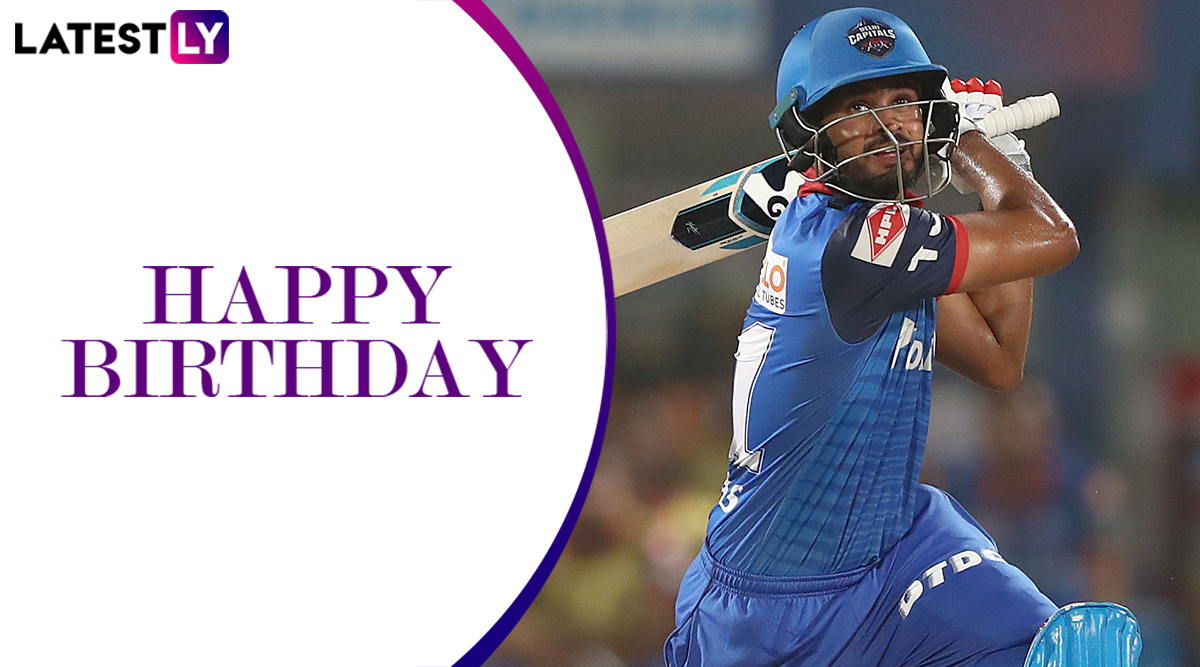 Shreyas Iyer, captain of Delhi Capitals team turns 25 years old on December 6, 2019. He is indeed a very talented player and also the part of current Indian Team, he has made 346 runs from 9 ODIs which includes four half-centuries, while he also recently scored a half-century against Bangladesh in the recently-concluded T20I series. Speaking about his Indian Premier League (IPL) career, the right-handed batsman Iyer has played 62 matches where he has made 1681 runs with an average of 30.56 and strike rate of 126.96. On the occasion of Shreyas Iyer's birthday, let us revisit some of his best innings in IPL. Shreyas Iyer Hits First T20I Fifty During India vs Bangladesh 3rd T20I 2019, Thrills Nagpur Crowd With Hat-Trick of Sixes off Afif Hossain’s Over.

Shreyas Iyer has been born and brought up in Mumbai, however, he is a Mangalorean, as his ancestors belong from Thrissur, Kerala. Iyer has been coached by Pravin Amre at the Shivaji Gymkhana in Mumbai. Delhi Capital skipper has also represented Trent Bridge Cricket Team during a trip to the UK in the year 2014, where he made 297 runs in three matches. Shreyas Iyer has scored 13 half-centuries in IPL. He has been associated with the Delhi team since 2015, at that time he was signed for 2.6 crores, making him the highest-earning uncapped player of the tournament. On 25th April, 2018 Shreyas Iyer replaced Gautam Gambhir as the captain of Delhi Daredevils team now known as Delhi Capitals.

The Delhi team skipper Shreyas Iyer played a gem inning of 96 runs from 57 balls to help his team chased down the total of 196 runs. Delhi Daredevils were struggling when they had lost six wickets at the score of 121 runs. They needed 75 runs from 36 balls, however, Iyer and Pat Cummins formed the eighth-wicket partnership of 61 runs in just 27 balls to bring down the equation to 15 required off 12 deliveries. Shreyas Iyer knock included 15 boundaries and two sixes. However, he got dismissed in the end by Basil Thampi, but till then the job was almost done. Click here to see the video of Iyer's fine knock.

The skipper of Delhi Capital helped his team bag two points against Royal Challengers Bangalore by playing a crucial knock of 67 runs from 50 balls. This helped Delhi to chase down the total of 150 runs with 7 balls to spare. The match was being played at M Chinnaswamy Stadium in Bengaluru. Click here to view the video of Shreyas Iyer's blistering knock.

This match was being played at Feroz Shah Kotla Stadium in Delhi, where home team posted a mammoth total of 219/4. In this match, Shreyas Iyer played an impressive inning of unbeaten 93 runs off 40 balls which included 10 sixes. Delhi Daredevils won this match by 55 runs, where the crowd saw Iyer smashing the ball all around the park. Click here to view the video of Shreyas Iyer's firing knock.

Shreyas Iyer had a brilliant IPL 2019 where he made 463 runs from 16 games which included three half-centuries and the highest score of 67 runs from 50 balls against Royal Challengers Bangalore. His fan will eagerly wait for him to explode in IPL 2020 and help his team become the champion for the first time. Under his captaincy, Delhi Capitals managed to make it to the playoffs in IPL 2019.