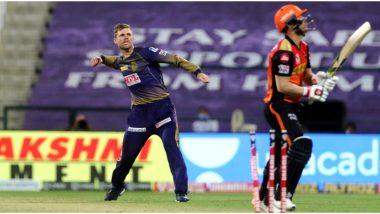 Riding on a sensational performance by Lockie Ferguson, Kolkata Knight Riders defeated Sunrisers Hyderabad in the super over, keeping their hopes of making to the playoffs intact. Chasing 164, SRH were able to tie contest thanks to significant cameos from Kane Willamson, Jonny Bairstow and a well-compiled 47 while skipper David Warner, who batted at number four. However, Ferguson, who was playing his first game of the season, bowled brilliantly in the one-over eliminator, dismissing David Warner and Abdul Samad in the first three balls. Requiring three runs, Dinesh Karthik and Eoin Morgan got KKR over the line with two balls to spare. Notably, Ferguson also scalped three vital wickets in the encounter. SRH vs KKR Highlights Dream11 IPL 2020.

Earlier in the match, SRH skipper David Warner won the toss and elected to bat first at the Sheikh Zayed Stadium in Abu Dhabi. Shubman Gill and Rahul Tripathi got KKR off to a flying start, adding 48 runs for the first. However, the tables turned around after the filed got open. Kolkata lost both their openers in quick successions, and the scoring rate also came down. Skipper Eoin Morgan and Dinesh Karthik provided the side late flourishes as KKR powered to 163/5. For Hyderabad, T Natarajan was the pick of the bowlers with two wickets. Meanwhile, let’s look at the stat highlights of the game. David Warner Becomes First Overseas Batsman to Complete 5000 IPL Runs.

# SRH vs KKR match is the third match in IPL 2020 which to advance to the Super Over.

# Lockie Ferguson bagged a three-wicket haul in his first game of the season.

# Warner is also the fastest to reach the landmark.

# Shubman Gill’s strike rate of 113.9 is lowest among batsmen who have played more than 60 deliveries in IPL 2020.

With this triumph, KKR consolidated the fourth position in team standings and are most likely to qualify for the playoffs. On the other hand, SRH need to win at least four of their remaining five games to make it to the top four. Fortunately, their net run rate is on the positive side, but that equation will only come into play if the Orange Army manages to clinch their maximum games.

(The above story first appeared on LatestLY on Oct 18, 2020 08:13 PM IST. For more news and updates on politics, world, sports, entertainment and lifestyle, log on to our website latestly.com).