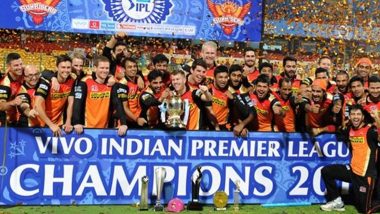 On this day (May 29), Sunrisers Hyderabad defeated Royal Challengers Bangalore (RCB) in the finals to lift their maiden Indian Premier League (IPL) title in 2016. As SRH’s triumph completes dour years, team captain David Warner took to his official Instagram account and recalled the day. The southpaw called the victory a ‘big family effort’ and hailed all the players involved in the process. Warner led his team from the front as he scored 848 runs in the tournament including a match-winning 69 in the final encounter against Virat Kohli’s RCB. With the ball, pacer Bhuvneshwar Kumar scalped 23 wickets and won the purple cap too. David Warner Dresses Up Like Baahubali in Fun TikTok Video to Entertain Fans.

“#OTD2016 so proud of all the people who were involved. Was a big family effort,” wrote Warner while sharing the team’s picture with the IPL trophy. Earlier in the day, the official Instagram account of SRH also recalled the prestigious moment and congratulated all the players. Meanwhile, have a look at the left-handed batsman’s post. ICC Teases David Warner Over His Love for TikTok Videos in Their Latest Twitter Post.

#OTD2016 so proud of all the people who were involved. Was a big family effort👏👏

Warner’s 'Orange army' were against the in-form RCB in the finals and many touted the latter side as favourites. Batting first, however, SRH posted a mammoth total of 208/7 courtesy a brilliant half-century by the skipper and a cameo of 39 runs off 15 balls by Ben Cutting.

In reply, RCB got off to a flier as Chris Gayle went all guns blazing from the outset. He scored a 38-ball 76 and set a great platform for the upcoming batsman. Skipper Kohli also scored 54 runs. However, Hyderabad bowlers made a brilliant comeback in the end overs and helped their side register an eight-run triumph.