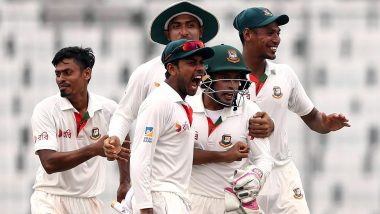 Bangladesh cricket team has taken rapid strides in the past decade and registered several memorable victories. One of their most remarkable triumphs came against mighty Australia on exact this day (August 30) in 2017. It was the first Test of the series at the Sher-e-Bangla Cricket Stadium in Dhaka. With Australia having the services of David Warner, Steve Smith, Pat Cummins and Nathan Lyon, the home team’s triumph was highly unlikely. However, Shakib Al Hasan was determined to make a mark, and he showcased an all-round show and guided Bangladesh to their maiden Test victory against Australia. New Zealand to Host West Indies, Pakistan, Australia and Bangladesh in Summer Season.

After winning the toss, the then Bangladesh skipper Mushfiqur Rahim opted to bat first. The decision didn’t prove to be much fruitful as Pat Cummins breathed fire with the new ball and dismissed three batsmen inside ten runs. However, opener Tamim Iqbal (71) joined forces with Shakib Al Hasan (84), and the duo added 155 runs for the fourth wicket. After their dismissal, however, the lower order couldn’t contribute much as the Bangla Tigers were packed for 260 runs. Shakib Al Hasan Set to Start Training in Bangladesh From September As He Eyes International Return.

In reply, Australia also didn’t get off to a great start as the likes of David Warner and Steve Smith were back in the hut cheaply. Thanks to some valuable knocks by Peter Handscomb and Ashton Agar, the visitors crawled to 217 runs. Shakib followed his brilliant half-century with a five-wicket halt and put his side on the driver’s seat.

#OnThisDay in 2017, Bangladesh registered their maiden Test win against Australia 🙌

Tamim Iqbal shone again with the bat in Bangladesh’s second innings as his fighting knock of 78 runs guided the hosts to 221, giving Australia a challenging target of 264 runs on a deteriorating Dhaka track.

However, the Aussies weren’t going to give up very quickly. David Warner came out to bat with all guns blazing and scored runs at a rapid pace. He scored a brilliant century as Australia looked favourites to win the encounter. However, Shakib ran through Australia’s middle order and brought another twist in the game.

Pat Cummins (33) tried to guide his team over the line. However, the tail-enders failed to tackle the spinning deliveries of Shakib Al Hasan and Taijul Islam as Australia fell 20 runs short of the target. Hasan bagged his second five-wicket haul of the game as Bangladesh registered their first Test victory against Australia.

(The above story first appeared on LatestLY on Aug 30, 2020 03:34 PM IST. For more news and updates on politics, world, sports, entertainment and lifestyle, log on to our website latestly.com).