Tim Paine vs Rohit Sharma: Here’s What Mumbai Indians has to Say About the Funny Banter Happened During Ind vs Aus 2018, Day 2 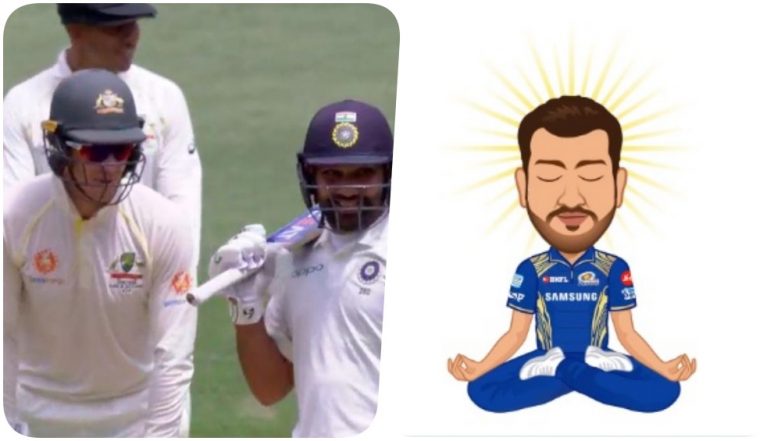 Today on the day two of India vs Australia 2018 third Test, Tim Paine’s funny banter became the talk of the town. It was when Rohit Sharma was batting, Tim Paine said to the Indian batsman, “It’s always been a toss up for me between the RR and MI, who I support. If Rohit hits a six here I’m changing to Mumbai.” The Indian batsman did not even bother answering to any of Paine’s banter and continued to focus on his game. Tim Paine During IND vs AUS 2018 Boxing Day Test: 'I'll Become a Mumbai Indians Fan if Rohit Sharma Hits a Six'.

But, Mumbai Indians had a very cool reply to the banter happened on-field. The franchise responded to the video posted by Cricket Australia with an emoticon which had Rohit Sharma meditating with his eyes closed. It looked that the franchise wanted to applaud Rohit Sharma’ calm headed attitude on-field. Check out MI’s reply below. Virat Kohli Test Batting Records: Indian Captain Surpasses This 16-Year-Old Record Previously Held by Rahul Dravid!

Rohit Sharma remained not out scoring 63 runs after facing 114 balls. Cheteshwar Pujara made 106 runs from 319 balls, whereas, Virat Kohli missed out on a century after he made 82 runs from 204 balls. The Indian captain surpassed the 16-year-old record created by Rahul Dravid and became the highest scoring Indian batsman on foreign soil in a calendar year. India declared their innings after creating a mammoth total of 443 runs for the loss of seven wickets. Australia were 8/0, with Marcus Harris and Aaron Finch unbeaten on 5 and 3 runs respectively, at stumps.