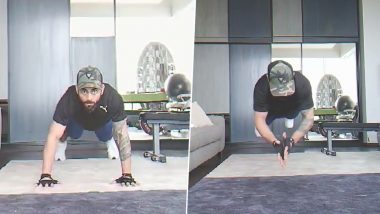 The COVID-19 outbreak might have put a pause on many major cricket activities around the world. However, several players are still leaving no stones unturned to keep themselves fit. Recently, Indian all-rounder Hardik Pandya left everyone impressed by sharing a video in which he can be seen doing flying push-ups. In the clip, he was seen jumping forward while doing push-ups. Well, replicating the exercise was certainly not easy for everyone. However, skipper Virat Kohli came up with an extreme version of Pandya’s drill. Taking to his Instagram account, the talismanic batsman posted a similar exercise but by adding a clap to it. Virat Kohli Gives Fans Major Fitness Goals With Weightlifting Video, AB de Villiers, Harbhajan Singh React.

Coming back to Pandya’s drill, the star all-rounder posted a video on Instagram a week ago in which he was seen doing some unique push-ups. The comment section of the post was filled in a jiffy as fans lauded Pandya’s strength and agility. The Baroda-born cricketer also challenged his elder brother Krunal to pull off the exercise. “Stronger. Fitter. Still, under construction @krunalpandya_official, I challenge you bhai! Let’s see how many you can do #PandyaBrothers,” wrote Pandya while sharing the video.

Stronger. Fitter. Still under construction 💪 @krunalpandya_official, I challenge you bhai! Let’s see how many you can do 😏 #PandyaBrothers

Well, Krunal was also to pull off the drill. However, Virat Kohli went one step ahead of the Pandya brothers. He also shared a video in which he can be seen flying push-ups. For a twist, however, he also added a clap in the way. “Hey H @hardikpandya93 loved your fly push-ups. Here's adding a little clap to it,” wrote the top-ranked ODI batsman while sharing the video. Fans were absolutely stunned by Kohli’s drill as they showered praises on him.

Talking about Cricket action, Indian Premier League (IPL) governing council chairman Brijesh Patel has made it clear that BCCI is planning to conduct the 2020 edition of the gala tournament in October-November. However, they will have to wait for the official confirmation of International Cricket Council (ICC) regarding the postponement of the T20 World Cup.

(The above story first appeared on LatestLY on Jul 02, 2020 05:55 PM IST. For more news and updates on politics, world, sports, entertainment and lifestyle, log on to our website latestly.com).