Want to Make a Comeback in ODIs, Says Ajinkya Rahane 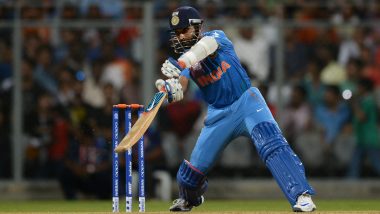 New Delhi, July 11: India Test vice-captain Ajinkya Rahane reiterated his desire to play ODI cricket and said he is ready to bat at any position according to the need of the team.

Rahane, in the past, has played both as an opener and also in the middle-order. But despite doing well with the bat, he was dropped in 2018 and has since found it difficult to break into the team.

"I have always enjoyed opening the batting (in ODIs) but I won't mind if I get a chance to play at no.4 as well. This is so because I have enjoyed both the roles," Rahane told ESPNcricinfo Cricketbaazi.

"It is very difficult to open the innings after you have been batting at no.4 for a while. It is very hard to say which position but I feel I can do well as an opener and also at no.4," he added.

The 31-year-old represented India in 90 ODIs in which he has amassed 2,962 runs at 35.26. During the 87 ODI innings he got a chance to bat, Rahane scored three centuries and 24 half-centuries.

"I am ready to bat at any position. Yes, I want to make a comeback in ODIs. But I don't know when opportunity will come my way," Rahane said.

"Mentally I am prepared to play all three formats. It's all about being positive with yourself and thinking positive about your abilities."

Earlier, former India opener Aakash Chopra had also said that Rahane should have been given a long rope in 50-over format considering he was doing well at no.4 before becoming sidelined from the format.

"At no.4 he held a very good record. And when you are performing at no.4 on a consistent basis and when your strike rate is also around 94, so why didn't he get opportunities after that? It seemed like a case of how one throws away fly from the milk. I feel he was hard done by," Chopra said in a video uploaded on his YouTube channel AakashVani.

(The above story first appeared on LatestLY on Jul 11, 2020 03:33 PM IST. For more news and updates on politics, world, sports, entertainment and lifestyle, log on to our website latestly.com).