Australia would have a point to prove after going down in the T20I series. Alex Carey would be their new skipper following an injury blow to Aaron Finch, which ruled him out of the first match. 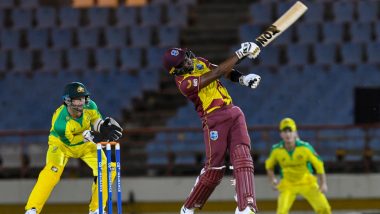 After suffering a series defeat in the T20s, Australia would be raring to make a comeback when they take on hosts West Indies in the first of the three-match ODI series, on Wednesday, July 21. The match would be played at the Kensington Oval in Barbados and is scheduled to start at 12:00 AM IST (Indian Standard Time). Australia suffered a 1-4 series loss in the T20Is, something that wouldn't do them much good ahead of the World T20 this year. Adding to all of this, their captain Aaron Finch has been ruled out with an injury and in his place, wicketkeeper Alex Carey would lead the side. Carey has prior experience of captaincy but it would be interesting to see how he leads the Australian side and boosts their confidence after a demoralising T20I series. India and Pakistan Drawn in Same Group At ICC Men’s T20 World Cup 2021; Netizens Express Excitement (See Reactions)

West Indies on the other hand would be mighty confident, heading into the ODI series. But 50-over cricket is a different ball game altogether and they would need to be at their best agains Australia. The last time these two sides have faced off in a bilateral ODI series in the Caribbean was way back in 2012 when the Windies had played out a 2-2 draw in the five-match series. Here are the live streaming details of this match:

The 1st ODI of the three-match series between West Indies and Australia will be played at the Kensington Oval in Barbados on July 21, 2021 (Wednesday). The match has a scheduled start time of 12:00 am IST (Indian Standard Time).

Where To Watch West Indies vs Australia, 1st ODI 2021 Match on TV

Unfortunately, West Indies vs Australia 1st ODI match won’t be available on TV as there are no official broadcasters of the series in India. So, fans won’t be able to watch the live telecast.

However, fans can follow West Indies vs Australia, 1st ODI 2021 live-action on the online platform. FanCode will provide the live streaming of the WI vs AUS 1st ODI match online but fans need to pay a nominal fee.

(The above story first appeared on LatestLY on Jul 20, 2021 10:44 PM IST. For more news and updates on politics, world, sports, entertainment and lifestyle, log on to our website latestly.com).