Who Will Win Ranji Trophy 2021-22 in Case Madhya Pradesh vs Mumbai Final Ends in a Draw?

Madhya Pradesh made a huge stride towards winning their maiden Ranji Trophy title with a massive 162-lead in the first innings over Mumbai. Mumbai had scored 374 after batting first in the Ranji Trophy final and Madhya Pradesh, in response, came up with 536 runs. So who wins the title in case the game ends in a draw? 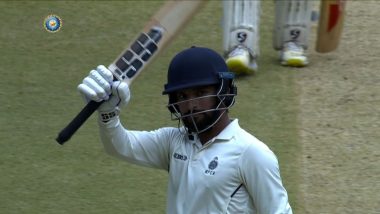 The Ranji Trophy 2021-22 final has turned out to be a very exciting one. Mumbai batted first and had posted a solid 374-run total and Madhya Pradesh came up with a very strong response, securing a 162-run lead over the former champions. With the action making its way into the fifth day and the possibility of a direct result looking bleak, the question is--who would win the Ranji Trophy if the match ends in a draw? Ranji Trophy 2021–22 Final: Madhya Pradesh Post 536, Take 162-Run Lead Over Mumbai

As stated earlier, Madhya Pradesh had a healthy 162-run lead over Mumbai after their first-innings batting effort. According to the Ranji Trophy rules, the team which has a first-innings lead goes on to win the game if it ends in a draw. Madhya Pradesh surely have put themselves in a good position to clinch a maiden Ranji Trophy title win with a massive 536-run total in the first innings, powered by hundreds from Yash Dubey (133), Shubham Sharma (116) and Rajat Patidar (122).

Mumbai on the other hand, need a miracle to win the title as they have to not just overhaul Madhya Pradesh's lead but also set a target and defend it successfully as well, all of which looks extremely unlikely at the moment.

(The above story first appeared on LatestLY on Jun 26, 2022 10:32 AM IST. For more news and updates on politics, world, sports, entertainment and lifestyle, log on to our website latestly.com).