The Match 29 of ICC Cricket World Cup 2019 will see West Indies lock horns with New Zealand at the Old Trafford Cricket Ground in Manchester. In terms of head to head record, in 64 games - West Indies have won 30, New Zealand 27 and 7 games produced no result. 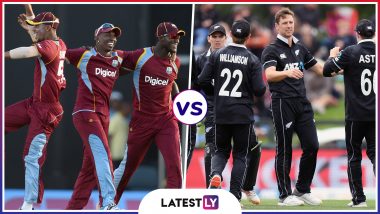 New Zealand have played some wonderful cricket in ICC Cricket World Cup 2019, showing great desire to win in a difficult situation. Their wins against South Africa and Bangladesh have shown the maturity level in the Black Caps camp. Next up for them is West Indies who have started to fade away after a bright start. A defeat against New Zealand may all but seal their fate in the 12th edition of Cricket World Cup in England. Windies need their big guns to rise up to the challenge posed by the Kiwis. In terms of head to head record, in 64 games - West Indies have won 30, New Zealand 27 and 7 games produced no result. Ahead of West Indies vs New Zealand clash in CWC 2019 at the Old Trafford Cricket Ground in Manchester, here's a look back at their last five games. West Indies vs New Zealand Cricket Score 29th ODI Match in ICC Cricket World Cup, 2019.

Heavy rains reduced the game to 23 overs a side with New Zealand putting up 131 batting first. In reply, the visitors lost 9 wickets for 99 with Trent Boult picking up three wickets. The Kiwis won by 66 runs.

The Kiwis won a fairly one-sided game, dominating in all three areas of the game. First up, an unbeaten 83 from Henry Nicholls helped the hosts put 325 on board. West Indies were then bowled out for 121 in 28 overs to complete the rout. West Indies vs New Zealand Betting Odds: Free Bet Odds, Predictions and Favourites During NZ vs WI in ICC Cricket World Cup 2019 Match 29.

Evin Lewis' patient 76 helped West Indies put a target of 249 for the Kiwis on a flat batting track. The hosts had little trouble getting home as the top order contributed heavily.

A record-breaking unbeaten 237 by Kiwi opener Martin Guptill helped the hosts reach 393 in their quota of fifty overs. West Indies could only manage 250 in the second innings as New Zealand won the game by a massive 143 runs.

West Indies powered by centuries from Dwayne Bravo and Kirk Edwards reached 363 batting first. New Zealand were never in the chase, losing early wickets. In the end, it was an easy 203 runs win for the West Indies.

West Indies need to believe they are capable of stopping this Kiwi juggernaut as it is a must-win game for them. For New Zealand, the task is simple - carry on from where they left against the Proteas

(The above story first appeared on LatestLY on Jun 22, 2019 10:18 AM IST. For more news and updates on politics, world, sports, entertainment and lifestyle, log on to our website latestly.com).