MS Dhoni-led CSK had become the first team in IPL history to win consecutive IPL titles when they beat RCB by 58 runs in the IPL 2011 final to win the trophy in successive IPL seasons. CSK, who had lost the IPL 2008 final to Rajasthan Royals, clinched their first-ever IPL title after beating Mumbai Indians by 22 runs in IPL 2010 final. 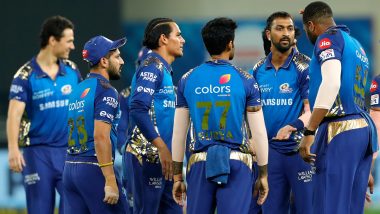 Mumbai Indians could become the second team in Indian Premier League (IPL) history to successfully defend the title after Chennai Super Kings (CSK) achieved the feat in 2010 and 2011. CSK had become the first-ever side in IPL history to successfully defend their IPL title when they beat Royal Challengers Bangalore (RCB) in IPL 2011 final. No team has since managed to retain the title for a second straight year after winning it in the previous season but Mumbai Indians are favourably placed to do it in IPL 2020. The defending champions and four-time winners have reduced Delhi Capitals to 41/3 within the opening six overs after the latter elected to bat first. MI vs DC Live Score Updates Dream11 IPL 2020 Final.

MS Dhoni-led CSK had become the first team in IPL history to win consecutive IPL titles when they beat RCB by 58 runs in the IPL 2011 final to win the trophy in successive IPL seasons. CSK, who had lost the IPL 2008 final to Rajasthan Royals, clinched their first-ever IPL title after beating Mumbai Indians, who were playing their first final, by 22 runs in IPL 2010 final. They then followed it with a 58-run win over RCB the next year to become the first team to successfully defend the IPL title. IPL 2020 Prize Money: Here's How Much Money Winning Team and Runners-up Will Get After MI vs DC Final Match.

Since then four different teams have won the title in eight seasons with Mumbai Indians winning four of them and Kolkata Knight Riders (KKR) two trophies. But no side have defended the title successfully. CSK came the closest to repeating the feat when they clinched the title on their return to the IPL in 2018 and also advanced to the final in IPL 2019. But Dhoni’s team fell to a one-run defeat against MI in the final and fell short of achieving the feat again.

Mumbai Indians, however, have the opportunity to achieve the feat in IPL 2020 if they manage to beat Delhi Capitals in IPL 2020 final. Mumbai Indians clinched the title last season after beating CSK by one run and can become the second team to win consecutive IPL titles if they defeat Delhi, who are chasing their maiden IPL title. History, however, is against Mumbai Indians whose four titles have all come in odd years. They have won the title in every alternate year since 2013 and need to beat history to create a new record and win successive IPL titles.

This is also the first time Mumbai Indians have progressed to the IPL final in successive years of the tournament. They reached the final in 2010 and then followed it with wins in 2013, 2017 and 2019. Surprisingly, Mumbai Indians have never played an IPL final in even years and also never won it in even years. It would therefore require a special performance to beat their own history and create a new IPL record.

While Mumbai Indians are the most successful team in IPL history with four titles to their name, Delhi Capitals are making their maiden appearance in an IPL final and are also chasing their maiden IPL title. They have advanced to the final for the first time in IPL history after a wait of 13 seasons and will want to end the title drought this night.

(The above story first appeared on LatestLY on Nov 10, 2020 08:40 PM IST. For more news and updates on politics, world, sports, entertainment and lifestyle, log on to our website latestly.com).