Led by Shane Warne, Rajasthan Royals were not among the favourites to the 2008 IPL title but they outplayed almost every side before defeating MS Dhoni’s CSK in the final to lift the trophy. Recalling that famous title win Pathan credited Warne for his pep Talks which inspired and ignited a fire in youngsters to perform and try and win the title. 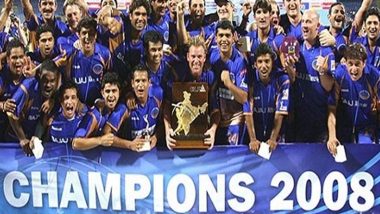 Former Indian cricketer, Yusuf Pathan recalled Rajasthan Royals’ Indian Premier League (IPL) win and revealed how Shane Warne’s pep talk inspired the players and helped everyone perform above their potential to record what remains the tournament’s most stunning and surprise win. Pathan, who represented Baroda in Indian domestic circuit, was part of an unfancied RR side who had very few stars and were among the least favourites to win the inaugural season of the IPL. But against many expectations, the Royals punched above its weight and beat Chennai Super Kings to win the trophy in 2008. Yusuf Pathan Reveals How Batsmen Failed to Read Shane Warne's Plans in IPL Season One.

Led by Australian Warne, Rajasthan Royals were not among the favourites to the 2008 IPL title but they outplayed almost every side before defeating MS Dhoni’s CSK in the final to lift the trophy. Recalling that famous title win, which also shaped the future of the tournament and its thrilling nature, Pathan credited Warne for his powerful speech which inspired and ignited a fire in the youngsters to perform and try and win the title. IPL 2020 to Be Held Outside India? BCCI Looking at All Possible Options.

“I still remember, he had said, ‘Even though we lost, if we perform to our potential, with the kind of talent we have shown at the domestic cricket and won matches for our teams, we can surely win the cup for the RR as well,” Yusuf said in an Instagram chat with former India teammate Mohammad Kaif, who was also part of the 2008 RR team.

Kaif, who represented India in 125 ODIs and 13 Test matches, also praised the spin legend for his leadership qualities and said “Shane Warne was ahead of his time. He started the concept of ‘horses for courses’. Warne got the best out of everyone. He had the quality of being flexible.”

Yusuf, the elder of the Pathan brothers, went on to score 435 runs in that victorious campaign and also picked eight wickets to play an instrumental role in Rajasthan Royals’ win. He was a revelation to Indian cricket with his power-hitting abilities leaving everyone mesmerized. He went on to become a regular Indian international on the back tremendous IPL success.

(The above story first appeared on LatestLY on Jun 04, 2020 07:10 PM IST. For more news and updates on politics, world, sports, entertainment and lifestyle, log on to our website latestly.com).