Yuvraj Singh expected to be selected as the captain for the 2007 T20 World Cup after major experienced stars withdrew from the competition, but was eventually snubbed by the selectors, entrusting MS Dhoni with the captaincy duties, who delivered on the expectations. 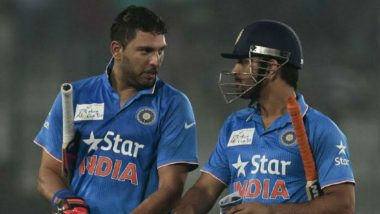 Ahead of the IPL 2019 auction, Yuvraj was among the 11 players released by KXIP. (Photo: @AravindPendyal2/Twitter)

Indian cricket was at one of its lowest points in 2007 following the team's disappointing outing at the Cricket World Cup when there were knocked out of the group stages. However, they managed to turn things around, winning the maiden T20 world cup later in the year, and one of the heroes of that triumph, Yuvraj Singh, has revealed that he expected to captain the team in the competition ahead of MS Dhoni. Yuvraj Singh’s Foundation YouWeCan Setting Up 1000 Hospital Beds Across India for Treatment of COVID-19 Patients.

Yuvraj Singh expected to be selected as the captain for the 2007 T20 World Cup after major experienced stars withdrew from the competition, but was eventually snubbed by the selectors, entrusting MS Dhoni with the captaincy duties, who delivered on the expectations.

Speaking to Gaurav Kapur in the 22 Yarns podcast, Yuvraj stated that he presumed to be named the Indian captain before MS Dhoni was selected for the role. 'So probably the seniors thought that they need a break and obviously nobody took the T20 World Cup seriously. I was expecting to captain India in the T20 World Cup and then it was announced MS Dhoni will be the captain,' the Punjab cricketer said.

Asked if his relationship with Dhoni survived the captaincy issue, Yuvraj stated, 'Obviously. Whoever becomes captain you got to support the guy whether it was Rahul, whether it was Sourav Ganguly, whoever in the future. End of the day you want to be a team man and that's how I was.'

Yuvraj played a crucial role in India's T20 World Cup campaign, helping them win the trophy by defeating Pakistan in the final. It was in this tournament that the Punjab cricketer smashed Stuart Broad for six sixes in an over. The all-rounder also led India to the 2011 World Cup win under MS Dhoni's captaincy.

(The above story first appeared on LatestLY on Jun 12, 2021 03:33 PM IST. For more news and updates on politics, world, sports, entertainment and lifestyle, log on to our website latestly.com).