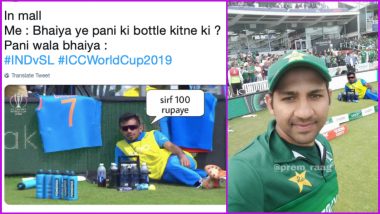 It doesn’t take netizens long to create a simple picture into a meme. India’s spinner Yuzvendra Chahal was rested during the team’s match against Sri Lanka in the ICC Cricket World Cup 2019 (CWC 2019). Chahal was seen carrying drinks for his teammates and was seen lying on the boundary and watching his teammates in action. The image was all netizens needed to create another viral meme. Charulata Patel, 87-Year-Old Fan, Attends India vs Sri Lanka CWC 2019 Match Thanks to Virat Kohli (See Pic).

ICC tweeted a picture of Chahal carrying drinks but had cropped his head in the photo and uploaded it with a caption,” guess who.” In response to ICC, Twitterati came up with various hilarious memes.

Chahal has been an important member of team India and was rested ahead of the crucial semi-final. India included all-rounder Ravindra Jadeja in Chahal’s absence in the playing XI. Jadeja did well with the ball and gave away 40 runs from his quota of ten overs apart from picking a crucial wicket of Kusal Mendis. Rohit Sharma Hilariously Trolls Yuzvendra Chahal on Instagram Ahead of IND vs SL, CWC 2019.

We have a winner

Chahal has thus far featured in seven matches at the Cricket World Cup 2019 for India and has picked 11 wickets, including the 4/51 against South Africa in India’s opening game.

Meanwhile, India have already made it to the semi-finals and are currently placed second on the ICC CWC 2019 points table. The Men in Blue are likely to face hosts England in the second semi-final on July 11.

(The above story first appeared on LatestLY on Jul 06, 2019 07:26 PM IST. For more news and updates on politics, world, sports, entertainment and lifestyle, log on to our website latestly.com).