Ambrose has denied the charges and issued a legal notice to the All India Football Federation claiming wrongful termination and defamation. The Indian team is currently on an exposure trip to Europe under head coach Thomas Dennerby ahead of the FIFA U-17 Women's World Cup in India later this year. Some sources claimed that it was chief coach Thomas Dennerby, who himself was a witness to the alleged 'incident' and immediately informed the AIFF. 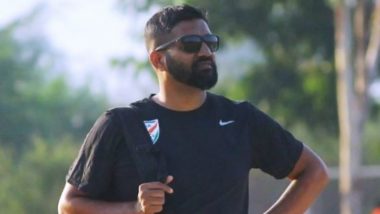 Mumbai, July 6: Alex Ambrose, who was sacked a couple of days ago as assistant coach of the India under-17 women's football team over allegations of "sexual misconduct", has denied the charges and issued a legal notice to the All India Football Federation claiming wrongful termination and defamation.

The notice, issued by advocate Madhukar P. Dalvi on behalf of Ambrose, claimed that the former India player "has been a victim of malafides and ulterior motives and objects at the instance of and behest of the All India Football Federation". Alex Ambrose, Indian U-17 Women's Football Team Assistant Coach Sacked for Sexual Misconduct

Dr. S.Y. Quraishi, a member of the Committee of Administrators (CoA) of the All India Football Federation (AIFF) tweeted a few days back that "Alex Ambrose, Asstt. The Head Coach of the Under-17 Women's team has been sacked for sexual misconduct. Further action under process."

The Indian team is currently on an exposure trip to Europe under head coach Thomas Dennerby ahead of the FIFA U-17 Women's World Cup in India later this year. Some sources claimed that it was chief coach Thomas Dennerby, who himself was a witness to the alleged 'incident' and immediately informed the AIFF. Ambrose, who was with the team, was brought back from the exposure trip by SAI after being informed by AIFF. Ambrose said he was not given time to refute the allegations and the action taken against him is a total violation of the rules of natural justice.

"My client is shocked and surprised to see the reckless action taken by the All India Football Federation is a total violation and breach of justice, equity, fair play and rules of natural justice. The actions taken by All India Football Federation is arbitrary and unconstitutional and is in total disregard to the Rule of Law and legal principles," Ambrose's advocate claimed in the notice. The notice further claimed that Ambrose has been forced to admit to what he has never done. "My client was forced to admit to what he has never done by putting him under fear, duress and coercion. My client was not allowed to offer any explanation nor was my client intimated or informed about the charges/allegations/accusations levelled against by him. My client has been sacked and terminated from his duties in an illegal, unlawful and unjust manner without following the due process of law," the notice said.

It said the AIFF informed him via email to attend a disciplinary hearing but did not accept his request to give a different date for the hearing as he had prior engagements.

"My client's image and reputation have been brutally tarnished and destroyed by the All India Football Federation by posting and publishing frivolous news/accusations against my client without making any enquiries, issuing any show-cause notice, giving him an opportunity to give his say and express his stand. My client has not even been intimated about the charges levelled against him. And without any of the above, a verdict seems to have been passed against him, punishing and penalizing him for things that he has not done at all. The above-said act of the AIFF amounts to grave violation of the basic canons of natural justice," the notice said.

Ambrose alleged that the AIFF "has been publishing false, frivolous and scandalous reports against my client and threatening and intimidating my client about serious actions including police action".

The notice called on AIFF to "forthwith withdraw the illegal termination letter dated 2nd July 2022 and restore the services of my client. My client hopes that wiser counsels will prevail upon you and you will adopt a rational approach in resolving this issue".

Allegations of sexual harassment and misconduct by coaches have been in a couple of incidents by women sportspersons in the last few weeks. The sport of cycling was rocked when female cyclist accused the head coach of harassment during an exposure trip in Slovenia. The coach has been sacked by SAI. A female sailor had also accused the accompanying coach of making her uncomfortable during an exposure abroad.

(The above story first appeared on LatestLY on Jul 06, 2022 11:10 PM IST. For more news and updates on politics, world, sports, entertainment and lifestyle, log on to our website latestly.com).